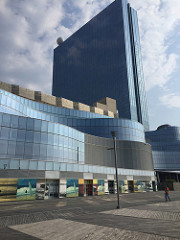 Atlantic City’s Ocean Resort Casino—formerly the Revel casino—is affiliating with the Hyatt hotel chain, but will continue to be run by its own management.

Officials for the Boardwalk property announced the affiliation of the sixth anniversary of the original Revel’s opening. The property was bought by a group headed by Colorado developer Bruce Deifik in January for $200 million which is working towards a summer re-opening.

The property will join the Unbound Collection by Hyatt brand, a collection of new hotel properties, the release said.

“Hyatt has an incredible 60-plus-year legacy in the industry, and its loyal global customer base will have access to an authentic way to experience all that makes Atlantic City attractive and popular,” Deifik said in a press release. “We are thrilled and proud to be joining The Unbound Collection by Hyatt portfolio as we prepare for the resort’s opening this summer.”

Ocean Resort will continue to own and operate the 1,399-room hotel and the casino, but will utilize Hyatt’s reservation systems and other infrastructure. The site will also include a 32,000-square-foot spa under Hyatt’s exhale fitness and spa brand. The spa will feature 32 treatment rooms, a mind and body studio, and a retail boutique, the release said.

The original Revel casino—which closed in 2014—never enjoyed affiliation with a national and global customer base.

Also, the casino recently received approval from the New Jersey Division of Gaming Enforcement for the design of its gambling chips, and has been advertising numerous jobs throughout the resort, according to a report by the Associated Press.

The property is expected to include 1,399 hotel rooms in addition to a casino, five swimming pools, indoor meeting and convention space and outdoor event space, according to the release.

Meanwhile the neighboring Hard Rock Atlantic City—the former Taj Mahal casino—is also working towards a summer opening and has unveiled a preview of the refurbished casino. The company opened a preview center at the resort’s Tanger Outlets retail complex.

Todd Moyer, senior vice president of marketing for Hard Rock Hotel & Casino Atlantic City, told the local Press of Atlantic City that the preview center gives Hard Rock a presence in the city before the casino’s planned opening on the Boardwalk in a few months.

“It really truly is hanging a shingle in town, our first one in Atlantic City. We’re building a much bigger one down the street, but having a place we can call home is pretty cool,” Moyer said. “Atlantic City is on a roll. Things are really looking bright for this town.”

Hard Rock also announced it has signed a customer agreement with NetEnt, a provider of digital casino solutions, for the distribution of online games. Hard Rock is planning to offer online gambling in the New Jersey market when it opens this summer.

Hard Rock has also appointed an executive who will serve as a community liaison.

Rob Lee, former community outreach coordinator for Joseph Jingoli & Son—which is partnered in the casino with Hard Rock—has been appointed vice president of community relations and governmental affairs for the casino.

And in another development in the area, The Wheel at Steel Pier, a $14 million Ferris wheel located directly across from Hard Rock at the Steel Pier opened for the spring season last week.

The ride’s highest point is 227 feet from its base and 300 feet above sea level. It offers views of the city, the coast and the Atlantic Ocean on a 15-minute ride.

“This is a statement,” Anthony Catanoso, Steel Pier’s owner and president, told the Press. “It says, ‘You know what, Atlantic City is coming back. We can build beautiful, non-gaming attractions that are first-class, and people are going to come and ride them.”