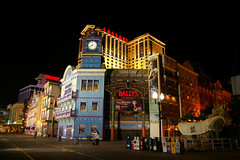 The $17 billion mega-merger of Caesars Entertainment and Eldorado Resorts has sparked a lot of talk about which of Caesars’ Las Vegas Strip casinos might be sold and who might be looking to buy them. Atlantic City, home of three Caesars casinos including Caesars and Bally’s (l.), hadn’t figured into the speculative swirl. But that’s changing. Eldorado already owns Atlantic City’s Tropicana.

Observers and analysts are studying the quarterly results filed last week by merger partners Caesars Entertainment and Eldorado Resorts for clues into the future of some of the casinos involved in the $17.3 billion tie-up—particularly in Atlantic City.

The Las Vegas Strip has taken up of much of the discussion about which of Caesars’ assets will be sold after the merger is consummated next year. More recently, though, the speculation has gravitated East.

Caesars owns three of the nine casinos in Atlantic City, a market that’s proving something of a drag on the company’s results, as the second quarter showed. While net revenues company-wide increased by 4.9 percent, or $103 million, compared to the 2018 quarter, they were down $47 million outside Las Vegas.

CEO Tony Rodio, formerly the chief executive officer of Tropicana Atlantic City, now owned by Eldorado, lauded the “solid results” achieved in the quarter, but noted they were “partially offset by competitive pressures in Atlantic City and other parts of our regional portfolio.”

Specifically, he said the three Atlantic City properties—Bally’s, Caesars and Harrah’s—“underperformed” compared to the other four casinos that were operating before last summer’s openings of Hard Rock Hotel & Casino Atlantic City and Ocean Casino Resort.

“Call me crazy, but I think we can improve things in Atlantic City a little bit,” he said.

It could be that the company needs to spend more money, he said.

“Particularly at Caesars Atlantic City, not so much at Harrah’s, I think that we could be deploying a little bit more capital dollars to create some incentives and some non-gaming amenities that give people a reason to come and visit our property. If you look at the properties that are successful—and I think Hard Rock is turning it around a little bit—it’s properties that have reinvested in the experience. And I think that we have failed to do that over the last couple of years.”

Eldorado, which entered Atlantic City last year with its acquisition of Tropicana Entertainment, reported net revenue down 3.5 percent year on year in its East Region portfolio. On the plus side, though, both operating income and EBITDA were up, indicating that Tropicana Atlantic City, unlike its Caesars competition, didn’t lose market share. In fact, 12-month EBITDA was “almost identical” to where it was before Hard Rock and Ocean opened, CEO Thomas Reeg said.

Eldorado, which has pursued an aggressive acquisitions strategy to grow from its Reno, Nevada roots to become a regional gaming powerhouse with 26 casinos in 12 states, reported second-quarter revenue of $637.1 million—a 39.5 percent increase over the same period in 2018—and record cash flow of $178.7 million. On the flip side, net income was down 48.7 percent to $18.9 million.

When the merger was announced last month, Reeg said he believed the new company could realize almost $500 million in synergies. He reiterated that point on Eldorado’s second quarter earnings call, leading some observers to suggest a sale of one of Caesars’ Atlantic City casinos is more possible than not once the merger is completed.

“If they sold an asset in Atlantic City, it wouldn’t be bad,” Robert Heller, CEO of Spectrum Gaming Capital, told The Press of Atlantic City. “They have too many assets. And they have now Tropicana, Caesars, Bally’s and Harrah’s, (and) that’s an awful lot of concentration in Atlantic City. So I think it’s a decent chance that they’ll sell one.”

Caesars could also sell assets on its own, a possibility, Reeg noted, that is not yet in Eldorado’s control.