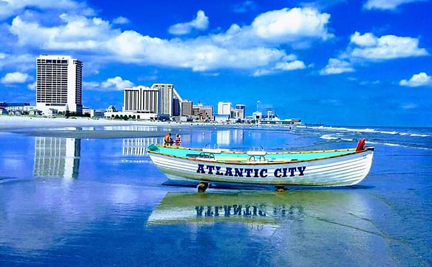 The casino industry in Atlantic City saw profits decline more than 37 percent in the third quarter despite seeing the properties reopen, albeit with restrictions. Only Ocean Casino Resort saw an increase in profitability. But consultant Bob Ambrose says were it not for online gaming and sports betting the results could have been worse.

During the third quarter, Atlantic City casinos reopened after shutting down for the second quarter due to the coronavirus pandemic. But the reopening carried restrictions and capacity limits. While the nine gaming halls turned a profit, all but one saw the profits shrink year over year based

on figures released November 23 by the state Division of Gaming Enforcement.

Overall, profits declined more than 37 percent compared to the third quarter of 2019, when no pandemic got in the way of full operations.

The lone improvement belonged to Ocean Casino Resort, which increased its operating profit in the third quarter, from $10.2 million last year to $24.4 million this year.

“It’s not all gloom and doom,” he said. “Online gambling and sports betting have been a great stabilizer for the market and could help carry the casinos through the winter. But add some bad winter weather in December and January and mandates won’t be an issue.”

Still, the capacity limits, the cutback in amenities, and the cost of cleanliness will continue to take their toll on the brick and mortar casinos in the fourth quarter and beyond until the pandemic rates flatten. So will a lack of public events and a lack of discretionary income due to unemployment.

“The data confirms what many have already suspected: The current public health crisis has both suppressed consumer demand for brick-and-mortar casino gaming and related amenities, and increased the costs of operating these services,” said Jane Bokunewicz, coordinator of a gambling and tourism institute at Stockton University. “This is a devastating equation for casino operators and their employees.”

The casinos collectively earned $150.5 million during July, August and September, down from $239.6 million a year ago, according to the Associated Press. Gross operating profit represents earnings before interest, taxes, depreciation and other expenses, and is a widely-accepted measure of profitability in the Atlantic City gambling industry.

The one bright spot, Ocean, has proven itself to be a viable contender in the Atlantic City market, Ambrose said. True, some of its customers come from other properties, in part because it’s the new kid, in part because of its unique experiences.

“But they have also had some very smart marketing programs. Customer loyalties can shift between casino properties with competing marketing offers and then a loyalty develops. A strong player development/host team is key. And that they have,” Ambrose said.

Ocean made great strides beginning in the latter half of 2019 and into 2020, said CEO Terry Glebocki. “We had nine straight months of double-digit year-over-year growth.”

While Covid-19 put a stop to the pattern, it didn’t stop the momentum, she said. Once allowed to reopen, Ocean has posted year-over-year increases consistently from July through October.

“We have been listening to our guests and seeing the results. We plan to continue to build upon the success we have seen both pre and post pandemic and are excited about our future,” Glebocki said.

The momentum should sustain the property even if more restrictions take hold.

“Throughout the summer and fall, we were dealt a number of last-minute circumstances that had to be addressed quickly but we stayed nimble and were often the first to market with some of our innovations,” Glebocki said.

After the imposition of a 25 percent capacity for indoor dining, Ocean brought food trucks to the Porte-cochere to handle summer volumes.

Then when indoor dining was scratched, the food trucks again saved the day.

“When we were limited to only outdoor dining, we sanitized an entire level of our parking garage, closing it off to vehicular traffic, decorating it with carpeting, palm trees, tables and chairs and serving full three course meals to our VIPs.”

The pandemic served as a showcase for how clean the property was inside and out. Indeed, casinos throughout the resort installed Plexiglas partitions and temperature-scanning cameras, and have turned off some slot machines to enforce social distancing.

Golden Nugget saw its profits fall 11 percent to $16 million; Bally’s, which changed hands this month when Rhode Island-based Bally’s Corp. bought it from Caesars Entertainment, was down 8.3 percent to $13 million; Profits at Resorts declined 16.7 percent to $7.7 million, and the Borgata fell nearly 97 percent to $2.3 million.

For the first three quarters of this year, Atlantic City’s casinos saw their gross operating profits decline by nearly 86 percent, a figure that includes the shut down during the late winter and spring.

Ambrose does not see another casino closure order coming down.

“More restrictions in the hospitality industry will further decimate the model and the local economy.”

As 2021 approaches, expect the properties to step up their creativity in marketing programs to match the conditions, Ambrose said.

“By mid-2021 things could look much brighter going into the summer months again, in conjunction with the proposed timeline of the vaccine.”

The reemergence of physical casinos not hampered should not mean the diminished role for online wagering, he said.

“I think online gambling and the sports betting component have proven to be a compliment to the brick and mortar casino rather than the detriment that was predicted. Both can operate in unison with each other,” Ambrose said.

It’s about a new audience borne out of a pandemic that forces may to seek entertainment from home or work from home. “This is an option many would have not tried otherwise. We may see a slow-down to the quick rapid growth in online play we have seen but when the world returns to somewhat of a new normal, online gains will not go away.”