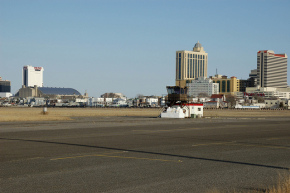 Atlantic City is spinning the wheel again on its 143-acre closed municipal airport hoping to bring a major attraction to the site.

The city’s latest request for proposal process for the tract brought four proposals.

One was made by Frank Boulton, the former owner of the independent minor-league Atlantic League’s Atlantic City Surf baseball team. The Surf played in a minor league stadium dubbed the Sandcastle at the site before the team folded in 2009.

Boulton says he wants to return baseball to the site and that the stadium is being underutilized.

“My goal is to assist in returning professional baseball to Atlantic City,” he told the Press of Atlantic City. “It’s an asset that’s being underused.”

Boulton told the paper that has visited the site on several occasions and met with city officials to discuss returning minor league baseball to the city. Boulton said he has had interest from potential buyers of teams that would consider locating in the resort.

Another proposal was submitted by Glenn Straub, owner of the former Revel casino, under the company name Atlantic Adventures LLC. The plan would turn the field back into an airport.

In 2015 Straub floated a similar plan for the site saying he wants to use the site for “business aviation” and “aviation entertainment,” according to the Press.

“We want to ask FAA to reopen a portion of the runway,” Straub said. “This town needs more people flying into it from places like Boston and Youngstown.”

The two other proposals were submitted by Pipe Dream Development Group, located in Brick, Ocean County, and Bader Field Development LLC, based in Long Branch, Monmouth County, according to city documents, but details were not available.

According to the Press, Scarborough outlined its plans for the site in October to renovate and update the area. The plan includes buying the adjacent property from Kushner Companies.

The proposal includes a letter from Kushner Companies to Scarborough saying the real estate company would be willing to sell the adjacent property if a “reasonable offer” was made.

The New York City-headquartered company formerly run by Trump’s son-in-law and senior adviser Jared Kushner has owned the plot of land next to Gardner’s Basin since 2004, the Press reported.

Scarborough’s proposal includes enhancements to existing Gardner’s Basin attractions and would also include adding attractions such as a children’s garden, a mini-golf course, a water taxi and development with retail, restaurants and parking along Caspian Point, according to the Press.