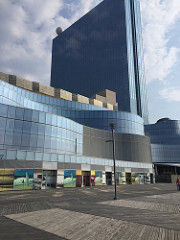 The state’s Division of Gaming Enforcement has filed a report on their findings for the casino and ownership, a spokesman for the commission told the Press of Atlantic City.

“This isn’t just a technicality. Being awarded a casino license is a very major step,” said Daniel Heneghan, spokesman for commission said. “We will hear testimony and they will discuss their plans to attempt to meet the burden of operating a casino, after which the commission will deliberate and make a decision.”

Ocean Resort officials are clearly confident that they will meet the state’s conditions and recently conducted a media tour of the refurbished property.

“We are fully on track with our gaming license to have it by the 28th,” Seth Shorr, a resort advisor told the Press. “We are confident we are opening and we are working very closely and on track to be opened by the 28th.”

Even if a gambling license is granted, Ocean Resort would still have to undergo a building inspection and operations test before its grand opening ceremony.

The $2.4 billion former Revel casino was bought for $200 million by a group led by Colorado developer Bruce Deifik earlier this year. It is scheduled to re-open the same day as the neighboring Hard Rock Atlantic City, which has undergone its own $500 million renovation from its days as the Trump Taj Mahal.

Shorr also told reporters that the casino will feature a sports book, 16 restaurants and the nightclub HQ Squared when it opens.

The casino has announced an affiliation with Hyatt Hotels and will also feature a 138,000 square foot casino with 2,000 slot machines, a 32,000 square foot spa, six pools, and a TopGolf virtual driving range.

In another story, Scores Gentleman’s Club—which operated at the former Taj Mahal casino—has won a legal case and is scheduled to re-open at the Hard Rock Atlantic City.

Hard Rock had challenged the re-opening partially charging that the club would denigrate its brand, but the suit was apparently settled and dismissed in February, according to local reports.

Scores is scheduled to be ready to open on June 28 with the rest of the property.