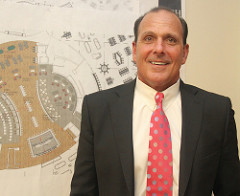 The New York-based hedge fund Luxor Capital Group that is taking over ownership of Atlantic City’s Ocean Resort casino seems to be sweeping clean top executives at the casino.

Frank Leone, the property’s former CEO, and Alan Greenstein, former chief financial officer, were both recently fired from their posts.

Eric Matejevich, former chief operating officer of the now-closed Atlantic Club Casino Hotel, has been named as CEO on an interim basis. Terry Glebocki, a former corporate chief financial officer of Tropicana Atlantic City, will replace Greenstein, according to a press release.

“As we move forward with enhancements to the guest and player experience—including substantial increases in our entertainment programming and player events throughout the year, adding a world-class buffet, additional suites and rooms, incremental investments on the casino floor and other exciting projects, Terry and Eric’s expertise will be invaluable in continuing our momentum,” the release said.

The Ocean Resort is the former Revel casino, which closed in 2014. It was purchased in early 2018 by Colorado-based developer Bruce Deifik for $229 million from Florida-based real estate developer Glenn Straub. The deal was backed by Luxor and JPMorgan Chase Bank.

The casino reopened in June. Luxor announced last month is was taking over ownership of the casino, which has been losing money steadily since the fall and has struggled near the bottom of the city’s nine casinos in revenue.

Leone and Greenstein were both part of Straub’s casino plan, TEN, which never materialized and were kept on by Deifik. Greenstein was also the CFO for the original Revel casino.

“We wish to thank Alan Greenstein for his years of service and wish him success in his future endeavors,” the Luxor statement said. “We also extend our good wishes to Frank, who will be pursuing other opportunities after having provided important leadership for Ocean Resort Casino.”

In a brighter story for the casino, the city’s new Arena Football League franchise—which is still in the process of picking a name—has named Ocean Resort to official host hotel for the team in a marketing deal. Special rates and discounted tickets will be offered to visiting team fans during the season.