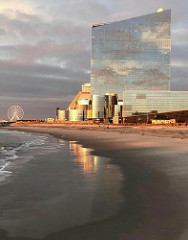 The trustee, Eric Matejevich said the casino can meet state-imposed requirements to have at least $36 million on hand at all times.

He also said the casino is already starting to show significant improvement in business levels despite it being Atlantic City’s off-season. The casino plans to launch a new marketing plan stressing customer value and has a new operating philosophy—that Ocean Resort is a casino with resort amenities rather than a resort that also offers gambling, he said.

“The prior two owners advertised this property as a resort,” Matejevich told the wire service. “We view ourselves as a great casino property with beautiful resort amenities.”

The casino, which cost $2.4 billion to build, has never turned a profit since opening in 2012. Matejevich is overseeing the casino until New York hedge fund Luxor Capital assumes ownership of the property.

Matejevich’s immediate priority was to stop serious losses at the casino since it re-opened in June that left it consistently falling below state-mandated liquidity requirements. He said the crisis was solved by an infusion of cash from Luxor, which ultimately plans to plow $70 million into the property.

“We’re back in compliance, and we will remain in compliance,” said Matejevich, who formerly served as chief operating officer for the Atlantic Club casino in Atlantic City before it shut down in 2014. “We have a parent company that is a very significant New York fund that is committed to the asset. We’re starting to already see a fairly significant increase in our business levels.

“We are able to offer the best value proposition in Atlantic City,” Matejevich said. “We provide the best amenities in this market in our slot product, restaurants, sports book, entertainment venues, hotel rooms, and parking garage, at price points that are comparable to the most value-oriented properties in this market.”

Matejevich also told the AP that a plan to build add another 500 hotel rooms to the property is still on the table, though not guaranteed. And getting a buffet opened remains a top priority.

Councilman Jeffree Fauntleroy II, who was also part of the altercation, pleaded guilty to an Atlantic City ordinance against impeding traffic in a public space and will pay a $500 fine.

According to the Press of Atlantic City, the pair of elected officials were charged with simple assault and harassment for their involvement in the fight at Golden Nugget Atlantic City on Nov. 11. Gilliam and Fauntleroy were recorded on security camera footage outside Haven Nightclub at 2:22 a.m. in a skirmish with three employees.

Gilliam and Fauntleroy pleaded not guilty in December after the complaints were transferred to Cape May County to avoid a conflict of interest in Atlantic County. All criminal charges against both elected officials were dismissed Thursday, which the complainants agreed to, the Press reported.