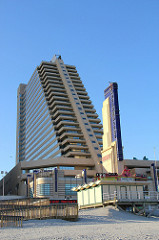 Atlantic City’s casino market could see a 10th casino open as plans are underway to re-open the third of five casinos that shut since 2014.

Philadelphia developer Bart Blatstein, owner of the Showboat Hotel, was granted preliminary approval for the New Jersey Casino Control Commission to seek a casino license. Blatstein bought the property in 2016 and re-opened it without casino gambling.

“There are 104 casinos in Las Vegas in the middle of nowhere,” Blatstein said. “We have nine casinos well within a short trip from one-third of the nation’s population. The market is looking for something different.”

Two formerly closed Boardwalk casinos reopened in June 2018 and immediately had an impact on the market. While overall casino revenue for the city is up substantially, six Atlantic Casinos won less from gamblers than in 2017.

Blatstein did not release many details of his plans, but did address one major concern. When Caesars Entertainment first closed the property in 2014 and then later sold it, they placed a deed restriction on the sale saying the hotel could not operate as a casino for 10 years, or until about 2024.

However, Blatstein said he can get around the restriction by building a new casino on land he owns adjacent to the casino and then connecting it to the hotel tower. The 123,000-square-foot lot off New Jersey Avenue is currently used for beach volleyball and is a separate property than the Showboat and not subject to the deed restriction, according to regulators.

Blatstein did say that he wants to build new to construct a facility that will attract a younger demographic and will emphasize sports and eSports.

“It needs to be different,” he said. “Young people are very mobile and very experience-oriented, so it will be designed accordingly.”

The Associated Press also reported that a report from the state Division of Gaming Enforcement says Blatstein plans to convert the property’s bus depot into a family entertainment center and that the new casino will a full range of slot machines, table games, sports betting and Internet gambling. A third-party management company would operate the casino, but no firm has yet been chosen, according to the state report.

Blatstein is also currently converting 400 hotel rooms at the property into 264 market-rate rental units. He said he hopes to break ground on a new casino structure in 2020.

Atlantic City saw four casinos close in 2014 when 12 casinos operated in the market. A fifth casino, the Trump Taj Mahal closed in 2016, leaving the city with seven operating casinos. Seven seemed a lucky number as the Atlantic City market stabilized. While casino revenue declined overall, all seven properties were operating at a profit.

In 2018, however, two casinos reopened. The Taj reopened as the Hard Rock Atlantic City and the former Revel casino reopened as the Ocean resort. Since the reopening, overall casino revenue for the city—which has also been buoyed by online gaming and sports betting—has soared, but seven casinos have seen revenue declines. The Ocean Resort has also struggled and is currently going through an ownership change.