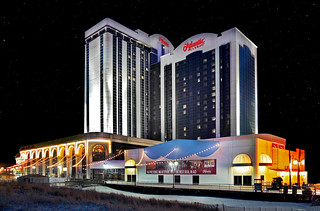 What a long, strange trip this it’s been—and still is. At one time early in its life, the former Golden Nugget on the Atlantic City Boardwalk showcased Frank Sinatra performing on the stage of the Opera House and was featured in TV commercials with Steve Wynn.

Colosseo president Rocco Sebastiani said he plans to run the building as a non-gambling hotel.

“We’re going to renovate the property and reopen it as an 800-room hotel with new retail and new food and beverage offerings,” he told the Associated Press. Sebastiani said he was drawn to “the challenge” of turning around the historic property.

“It’s got a lot of renovating that needs to be done; that’s what we do,” he said. “We buy assets that need a lot of work and bring them up to market.”

The company does not have, nor does it plan to seek, a gaming license. A deed restriction prevents it from being used as a casino.

Three previous sales have fallen through. In December 2014, Pennsylvania firm Endeavor Property Group inked a deal to convert the property into senior citizen and multiunit housing. In April 2017, a local investment group led by investor Ronald Young signed an agreement, announcing plans for a family-friendly hotel, anchored by an indoor water park. But when financing dried up, so too did the water park plan, and the Atlantic Club went back on the market.

In September 2018, a proposed purchase with Stockton University as part of its new Atlantic City campus also died.

It closed in January 2014 and purchased by Tropicana Entertainment and Caesars Entertainment, with Caesars maintaining control of the buildings and property. Caesars then sold it to TJM for $13.5 million—with a deed restriction.

Prior to its operation as Atlantic Club—and after the Golden Nugget—the property was known as Bally’s Grand and simply the Grand.