Barton: Online Poker, Sports Betting Could Be in Fed Mix 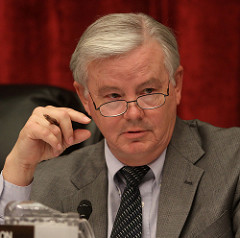 A Texas congressman says a hearing on horseracing bill addressing doping last week led to a discussion of legal sports betting and online poker, raising the possibility that the bill could be expanded to include federal regulation of the other two areas of gaming.

The first scheduled U.S. congressional hearing on sports betting had been scheduled for last week, but was postponed indefinitely. Speaking to Roll Call, U.S. Rep. Joe Barton of Texas said he is “looking at” including language on online poker and sports betting expansion in the bill.

It probably will not happen. According to Online Poker Report, it is only the latest in a long line of attempts by Barton to legalize online poker at the federal level. The sponsor of the horse-racing bill, Rep. Andy Barr of Kentucky, told the news outlet he does not want unrelated issues to jeopardize passage of the racing bill, which has 125 co-sponsors and is on a solid path to passage.