HomeThe ShuffleBasic Strategy and Other Tips from a Blackjack Pro

Basic Strategy and Other Tips from a Blackjack Pro 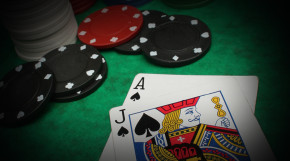 Now that random shuffling has eliminated the card counter’s edge, can a person just sit down at a blackjack table with no knowledge of the game and rely on luck? No, says John Bukofsky, author of “Blackjack: Play Like the Pros.” Some preliminary knowledge is important for any hope of winning.

iGamingPlayer.com spoke to Bukofsky about how to learn the game of blackjack. This is the third of a three-part interview with Bukofsky.

iGamingPlayer.com: What would you recommend all blackjack players learn, to maximize their chances of winning, whether at a live casino or online?

And then learn to count cards?

Bukofsky: Sure. Learn it to get an edge, but know that card counting can only be effective in those situations where a deck or decks are depleted by rounds between shuffles. Obviously, when every round of blackjack is played from a freshly shuffled pack of cards, then card counting isn’t beneficial. Basic Strategy, however, is still beneficial, and that’s why it should always be used.

Have you ever been barred from playing blackjack?

Bukofsky: Yes, I’ve gotten barred and backed-off in Las Vegas, and capped and limited to one hand in Atlantic City and elsewhere. Once on a cruise, too, I was informed by a note under my cabin door that I could enjoy all of the amenities that the ship has to offer, as long as I stayed out of the casino. I didn’t want to swim back to New Jersey, and so I stayed out of the casino.

What do you consider the single most important aspect of gambling?

Bukofsky: I guess whether or not you’re getting an edge. Gambling, though, is an interesting word. When you have an edge, are you really gambling? I suppose per individual trial you are, but in the long run you aren’t. When you don’t have an edge, then you’re both gambling per trial and, more importantly, in the long run, whatever the long run represents. Gambling and risk have always been a fascinating subject to me. Not only did I, at one time, play blackjack seriously, but I’ve worked in various capacities for several Fortune 500 companies in evaluating and engineering risk.

So I’ve always been around risk, in a sense, and am fascinated by how it permeates so much of everyday life, in one form or another. Something as mundane as driving a car to get somewhere, for example, is a risk versus reward scenario, if you really think about it. Pushing the limits of risk is as well a fascinating concept.

Bukofsky: I was once walking through one of the retail corridors at The Wynn in Las Vegas and found myself walking along next to none other than Donald Trump. At the time, he was this big-time casino magnate that ruled Atlantic City, which is where I still played from time to time.

I struck up a conversation and continued chatting with him even after his bodyguard had jumped between us. I remember thinking as we walked along how this was the embodiment of the casinos I was beating with consistency back in Atlantic City. Of course, I kept that to myself, but it might have been in some ways “Apprentice”–like to share with him firsthand some of the ways his blackjack games were hemorrhaging money to proficient card counters. But I didn’t want to get anyone fired, and so I kept the short conversation strictly about AC in general. It has always been funny to me that in one very critical way I knew Donald Trump’s casinos more intimately than he did. Sorry, Mr. President.

Sheree Bykofsky is a literary agent, poker pro, and the author of four poker books, including “The Kaizen of Poker” (ECW Press), forthcoming in September 2018. She represents John Bukofsky. The two are not related, even though their last names are similar.