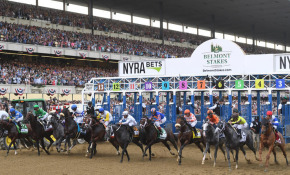 Sometimes you CAN throw money at a problem.

The Belmont Stakes on June 10 is often impacted by the Kentucky Derby and Preakness Stakes. If a horse sweeps them, the Belmont becomes an electrically charged event. If no horse does, it becomes an anti-climactic finale to the Triple Crown series. That appears to be the case this year, with Always Dreaming and Cloud Computing capturing the Derby and Preakness. They not only ruled out a potential Triple Crown, but are not even scheduled to run in the Belmont.

This is why Belmont officials created an aura onto its property in recent years.

Numerous high-level stakes events totaling more than $7 million will unfold at the track June 10. The Belmont Stakes day becomes a wagering paradise, with events like the $1.2 million Mohegan Sun Metropolitan Handicap and the $1 million Woodford Reserve Manhattan joining the $1.5 million Belmont Stakes as signature events. The $750,000 Ogden Phipps, $700,000 Longines Just a Game and $500,000 Woody Stephens stakes races further indicate the track’s effort to garner high-profile attention. Placing this in perspective, many tracks would make any of these races their top event of the year. High-level events draw serious bettors.

Smart move. Belmont Park grew tired of drawing a yawn in the racing world when no horse swept the Derby and Preakness. The Belmont Stakes at 1.5 miles is by far the most demanding of the Triple Crown races and the best test of a horse’s endurance.

Its message to top horsemen now could be: we’re having a party, come if you’d like.

Lookin at Lee and Senior Investment, who were moving best at the end of the Preakness, will likely receive betting attention. So will Classic Empire, who sports a fourth- and second-place finish in the first two Triple Crown races, but has been branded as an under-achiever for coughing up a three-length lead at the Preakness? Maybe it’s his time?

The Belmont field should be small enough that traffic problems should not ensue and jockeys would figure to make their move at the right time. It should only be a matter of who has the best horse, instead of who gets the best trip.

You asked for it, you’ve got it. And the numbers gave you a heads-up.

As the Golden State Warriors and Cleveland Cavaliers met for the rarest of matchups, a third straight NBA Finals, some compelling factors emerged. Golden State was listed as a -260 favorite, meaning that a $100 bet would only win $38.46, while the Cavs, at +220, would return $220 for a $100 wager.

In some sports, like boxing, this would be considered parity. In basketball, it’s considered an indication of a romp.

As Golden State romped through the early stages of the finale, odds-makers appeared solid in making the Warriors a prohibitive favorite. With the series shifting to Cleveland, Golden State was still a three-point early favorite ahead of their matchup on Wednesday, June 7. This will be the most faith shown to the Cavs by the bettors in Friday’s fourth game. If they are down 3-0, this is likely too hard to call.