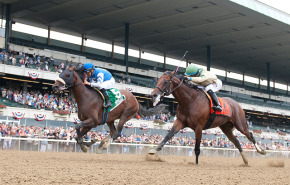 July is scorching with its thoroughbred racing menu, especially on weekends. Let’s look at the first two.

Belmont Park continues to place building blocks, constructing an identity beyond its one famous event. The racing world knows its annual Belmont Stakes, the final leg of the industry’s Triple Crown and the place where Justify captured that honor in early June. But, the New York track launched another aura that weekend, positioning the Belmont inside a stakes package of 18 races in three days. It elevated weekend handle, lifted the track’s profile to worldwide bettors and championed the concept of enticing a captive audience with a string of high-quality events.

That philosophy unfolds again Saturday, July 7, with the return of the popular Stars & Stripes Racing Festival. Launched in 2014, the internationally themed day again features a pair of prestigious Grade 1 races on the turf with the $1.2 million Belmont Derby Invitational and the $1 million Belmont Oaks Invitational for fillies, both at 1 1-4 miles. Three additional stakes round out the superlative card, including the $700,000 Suburban Handicap, $350,000 Sprint Championship, and the $300,000 Dwyer.

A few thoughts about turf: Practically all major European stakes races are on turf, whereas American tracks conduct theirs on dirt. Post positions also matter more in turf races, which often attract larger fields, a bigger chance for traffic problems and tight turns. A switch from the outside post to the middle or inside, for instance, could forge a major improvement for a horse, perhaps at a price. Payoffs are usually handsome, given the quality and size of the field, coupled with substantial betting pools.

Turf conditions are expected to be ideal Saturday, resulting in a firm track surface. If rain does develop, a yielding or soft designation may ensue, meaning the horses will sink further into the track with each step than normal. It takes more energy to move, making it hard for explosive speed horses to build their speed. Stalkers and late-running horses perform well in those conditions.

Looking forward, Belmont is expected to favor speed horses on turf throughout July. Under dry, warm conditions, its firm turf is often different in July than during May. At this point, its turf course has been known to change from favoring ralliers to rewarding speed horses. You should see this affect running style and positioning.

What about betting value? New York has a reasonable 15 percent takeout percentage for pick 6 wagering, 16 percent for win, place and show. The exacta is 18.5 percent, still not too bad. Trifectas and superfectas at 24 percent are no bargain, explaining the surge in Pick 5 and Pick 6 wagering.

Throughout the industry, Saturday, July 7 means an abundance of riches. Delaware Park has the $300,000 Delaware Oaks and the $200,000 Robert G. Dick Memorial Stakes. Parx in Pennsylvania offers the $200,000 Parx Dash.

If you are a big-race player, there is enough high-level action on those days to create your own super card of 10 or more events.