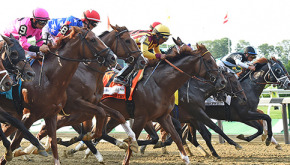 Excitement abounds as Justify tries to become the second Triple Crown winner in four years. He will try to add the 1 1-2 mile Belmont Stakes to victories in the Kentucky Derby and Preakness. The attempt to match American Pharoah’s 2015 feat heightened both fan and betting interest in the race. It also gives pause, during Belmont’s milestone running of this event, to salute the greatest horse of all time, Secretariat. You may want to compare his record of 2:24 to finish in 1973 to the winner of this race. Based on the concept that one second equals five lengths in a horse race, he would have beaten fellow Triple Crown winner American Pharoah by 10 lengths and last year’s winner, Tapwrit, by a whopping 30. So, 45 years after Secretariat mowed down the Belmont field, it still looks like the Forever Record.

Justify is figured to have stiff competition from a freshened field, but was still 4-5 early in the week. Preakness runner-up Bravazo, third-place finisher Tenfold and a rested Vino Rosso, whose bad position blunted his Kentucky Derby effort, should be heard from, among others. The field was 11 and growing at the start of the week.

How will the pace be? American Pharoah was able to get the early lead, avoid a speed duel and surge at the finish. That’s been in line with recent thinking on how to win the marathon race.

It is one of the greatest weekends of the year, with Belmont pouring more than $8 million of purses into a Friday-Saturday whirlwind. This was an insurance policy in case there would be no Triple Crown candidate and now it’s a wagering euphoria. The $600,000 New York Stakes packs a loaded Friday card, while the $1.2 million Metropolitan and $1 million Manhattan are added to the $1.5 million Belmont Stakes on Saturday. Along with a series of $700,000 and $400,000 races, top to bottom, perhaps the best non-Breeders Cup card of the year.

One week later, the fabled Churchill Downs reclaims center stage. On June 16, the home of the Kentucky Derby comes up big with the $500,000 Stephen Foster, $200,000 Wise Dan and Fleur de Lis, along with the $100,000 Regret and Matt Winn events. The big tracks get the idea of doing something to distinguish themselves from one another.

It’s worth investing heavily to try and corner the betting market on a particular day. That can be done with huge races or massive carryovers in betting pools like the Pick Six. Belmont tosses in the $300,000 Poker Stakes on June 16, while Santa Anita and the recently opened Delaware Park offer some six-figure events.

Hope you were able to jump on the trend outlined here a couple weeks back. The reeling Dodgers were able to steal a ninth-inning win and subsequent road sweep over the Washington Nationals.

If you hopped on the notion that the defending National League champions were back, you soared. The Dodgers started the week on a 10-4 run and swept the Colorado Rockies on the road. Two road sweeps in two weeks: highly improbable. And, they did it while Clayton Kershaw went back on the DL.

But, when you’re hot, you’re hot. It would be tempting to jump off them now, as they scored more than 10 runs in three straight games and have to play the Pirates, Cubs and Giants soon, but they did go 43-7 at one point last year.