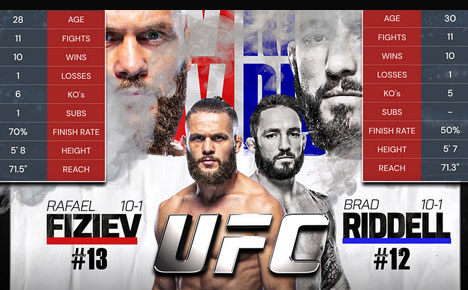 UFC Vegas 44 is Saturday in Las Vegas. While the bantamweight contest is making all the noise, this card includes some other intriguing matchups. Like Fiziev vs. Riddell.

UFC Vegas 44 is set for Saturday at UFC APEX in Las Vegas, with five fights on the main card and nine on the undercard. The main event is Rob Font vs. Jose Aldo. Font is the -162 favorite, with Aldo at +130. This contest between bantamweights is the big event of the night, and rightly so. But there are several other intriguing matchups.

One of them immediately precedes Font-Aldo. Rafael Fiziev vs. Brad Riddell, billed as the co-main event, will feature two up-and-coming lightweights. Fiziev is the slight favorite at -120, while Riddell is at -109.

The 13 other fights provide some favorable betting opportunities too. Here’s a look at UFC Vegas 44, and some of our best betting tips. 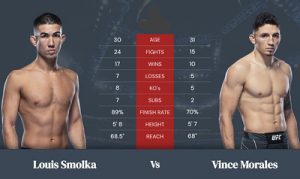 One of the best fights on the undercard almost didn’t happen. After Louis Smolka had to pull out of his fight with Sean O’Malley at UFC 264 in July with an infection, he wanted to get one more bout in before the end of the year.

When he was offered Vince Morales, Smolka hesitated; his main training partner is Ricky Simon, Morales’ cousin. Morales was unsure about going against Smolka for the same reason.

But the two put aside their reservations, and Saturday’s fight could be the best of the nine prelims. Morales is the underdog at +115, and Smolka, at -145, believes he will prevail.

“I just think I’m a little better everywhere, honestly… I want to finish him, I think I only have two decisions in my 17 wins,” Smolka told reporters. “I’m trying to finish the fight all the time, and I’m hoping to get the finish.”

We agree. Smolka is the better fighter, and there are concerns with Morales coming back for just his second fight after tearing his Achilles. Smolka should win this bout, but it won’t be easy. We wouldn’t be surprised if it went the distance

Score a TKO at BetRivers, where your first deposit will be matched dollar for dollar up to $250.

At first it didn’t look like Jose Aldo could make the transition from featherweight to bantamweight. He lost his first two fights in the new division, but the 35-year-old has turned it around, winning his last two.

Now he faces his biggest test yet, facing off with Rob Font. Font is on a four-fight winning streak, and is the favorite to win Saturday, at -162. Aldo comes in at +130.

But Font is vulnerable. The 34-year-old can overextend at times, and if Aldo hopes to win, he’ll take advantage of that weakness. We think Aldo will use his very effective leg kicks and striking power to come out with a victorious upset.

New bettors at Golden Nugget Sportsbook receive up to $250 in Free Bets! Sign up and start betting today.

The last fights for both Jamahal Hill and Jimmy Crute are ones they would rather forget. Crute sustained a leg injury in his April loss to Anthony Smith, while Hill suffered an arm injury in his loss to Paul Craig in June.

Now the two square off against each other on Saturday, hoping to bounce back from their respective defeats. Crute comes in as the overwhelming favorite at -200, while Hill is at +155.

Crute is the top pick for a reason. He’s 12-2, with nine of those victories coming through knockouts or submissions. He possesses strong striking power as well as a vice grip that foes can find hard to escape. That should also be the case against Hill. Crute will use superior power and skill to easily defeat his opponent.

Another reason to favor Crute: he defeated Craig, an opponent Hill lost to.

Get Ready for UFC Vegas 44