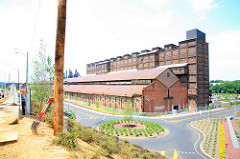 Officials of the city of Bethlehem, Pennsylvania have been among those most closely following the pending sale of its local casino, Sands Casino Resort Bethlehem, to Wind Creek Hospitality, a venture of the Poarch Band of Creek Indians of Alabama.

Bethlehem officials said last week in comments to Lehigh Valley Business that they hope the tribe, which intends to change the Sands’ name to Wind Creek Bethlehem, will follow through on the development of the Sands site—formerly the home of Bethlehem Steel Corporation—that was initially promised by current owner Las Vegas Sands Corp.

Tony Hanna, executive director of the Bethlehem Redevelopment Authority, told Lehigh Valley Business the sale could revive that original master plan. “There are almost infinite possibilities for development,” he said. “We are hoping that the potential sale of the casino will jump-start development of the site.”

While the Poarch Creek Band has been noncommittal regarding plans for the property after the sale is finalized sometime next year, Hanna speculated that the first parcel up for redevelopment will likely be Machine Top No. 2, which is closest to the casino and the largest vacant structure on a site. It is owned by Sands subsidiary Sands Bethworks Retail, which had once planned for a Bass Pro Shops retail store there.

Hanna told the newspaper the side is in “very bad shape,” and will probably be redeveloped by the tribe. “The sooner something gets done with it, the better,” he said. ““The Machine Shop we thought was the next logical step for development of the site because it’s connected to the Sands complex and connects all the way to the SteelStacks site,” added Darlene Heller, planning director for the city. “So that’s the next logical phase.”

Other parcels on the Sands site include the former Bethlehem Steel office building, also owned by the Sands subsidiary, which could be considered for transformation into apartments or a hotel, Hanna said.

There have been proposals over the past few years that haven’t moved forward with the Sands,” Bethlehem Mayor Bob Donchez told LVH. “I’m certainly hoping that if the new ownership is approved by the regulatory agencies, that we would see some development at that site.”

Meanwhile, Sands officials appeared before the Pennsylvania Gaming Control Board last week to make the case for a five-year renewal of its casino license. Sands officials sited the $1 billion investment the company has made in the property, the 2,500 jobs it provides, and the $3.2 million in charitable giving from the casino since its 2009 opening.

The pending sale was not mentioned in the hearing, the first of two before the board before a decision on license renewal is made. The Sands has yet to file a change-of-ownership and control application with the board.

Donchez, who was unable to testify in person, sent a written statement to the board declaring the importance of the casino property to the city. “The benefits of the project for the entire Lehigh Valley cannot be overstated,” Donchez wrote. “The host fee alone is helping to stabilize the budgets for Allentown and Bethlehem, Northampton and Lehigh counties and the city of Easton.”

Donchez also took a dig at LVS in his statement, while praising the initial investment:

“The Sands’ initial investment and outreach helped to set the bar for corporate community involvement which, along with other developments at the site, have helped to create a major tourism draw to the city,” Donchez wrote. “Over time, the corporate parent of Sands Bethlehem shifted their priorities around their portfolio management activities, and while still a very successful property with an engaged local management team, additional and expected development has not taken place.”

Sands officials, in addition to highlighting their contributions to the local economy, had to defend their decision to withhold host payments to Bethlehem and the other municipalities after the original host-fee law was declared unconstitutional, while most other casinos continued payments while the legislature debated a new fee law, which was passed with the November gaming legislation. Under questioning by board member Dante Santoni Jr., Sands President and CEO Brian Carr noted that the fees were paid as promised after the law was enacted.

“We are a publicly traded company,” Carr said. “We have a fiduciary responsibility to our shareholders. There was not a tax on the books that required us to make the payments. I will say this: We never said that we weren’t going to pay it. We actually accrued it during the time that it was ruled unconstitutional. And the second that the legislature got it fixed and got the law back on the books, it was paid.”