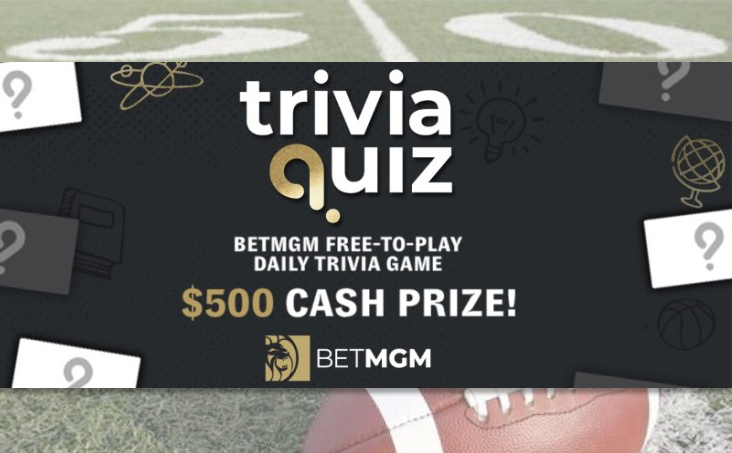 Want to test your smarts? Dublin-based SportCaller and BetMGM have launched a series of daily, free-to-play online quiz games. Answer 10 questions correctly as the clock ticks down, and you win!

If you love Trivial Pursuit, Jeopardy! and other quiz-style games, you’re going to love Trivia Quiz, offered daily and for free at BetMGM.com.

The trivia tests, from BetMGM and Irish sports game provider SportCaller, are a fun diversion for most adults who remain shut in at home.

Best of all, though the games are 100% free to play, you can still win big bucks. And who wouldn’t welcome a cash windfall right about now?

Trivia Quiz is “filling the void for fun and entertainment during this challenging spell,” said SportCaller’s Cillian Barry, in announcing the launch.

Bet on the future—the future of pro football, basketball and more! Place a minimum $10 wager on any futures event at BetMGM.com and get $10 FREEPLAY to use on any casino game!

Trivia Quiz questions cover a variety of topics from sports to geography and entertainment. You have to answer each question correctly—within a 10-second window—to move on to the next question.

Answer all 10 questions correctly, and you get a daily prize of up to $500 in cash. You’ll also earn points for the weekly leaderboard, Monday to Sunday.

Make it to the weekly Top 5, and you’ll receive an additional cash prize up to $1,000. The prize will be divided equally if there are multiple winners.

Get This Offer In 4 Easy Steps:

You must be 21 or older to participate. Quiz results & leaderboard will update within 1 hour after quiz is complete.

Just for fun, check out the following Top 10 answers from a few recent sports-based quizzes. Would you have won?