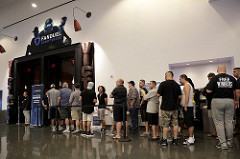 A baseball game that went extra innings may have ended too late for the winning bettors to get paid, but some claimed the new sports book at the FanDuel sports book at the Meadowlands Racetrack didn’t have enough money on hand to pay the bets.

LegalSportsReport.com reported that some bettors left without getting their bets paid, and several claimed they were told it was because there wasn’t enough cash on hand. But when a contest between the Los Angeles Dodgers and the Philadelphia Phillies went 16 innings—past the closing time at the FanDuel sports book—some bettors took their winning tickets home after the windows closed. Reports that a lack of cash caused the windows to close was vigorously denied by the company.

“The FanDuel Sportsbook’s business hours of operation last night were to 1 a.m., as clearly posted throughout the facility,” said Hennessy in a statement. “Once 1 a.m. hits, our cages are closed. We cannot take wagers or pay out wagers after that time. To be clear, there was no issue with cash on hand. All customers are welcome to return today to collect any winnings, or to mail in any winning tickets for payment.”

Meanwhile, the Meadowlands has unofficially announced that it took in $3.5 million in bets during its first nine days of operation, which was a very slow period for sports action.

The Meadowlands numbers are not the official tally which will be released by the New Jersey Division of Gaming Enforcement next month, but still signify that the track’s sports book is off to a solid start.

“We did OK,” track owner Jeff Gural told the Associated Press. “Our goal the first weekend was to exceed $1 million which we did. The next four days were quiet with nothing to bet on due to the (baseball) All-Star break.”

The track, however, did take in $650,000 on the Saturday after the MLB break, Gural said. He said he is pleased with the sports book’s opening, though the facility still has only 10 of a planned 15 betting windows operating.

According to figures released by Monmouth Park, live handle is up 8 percent over the same period a year ago, with $11,513,732 wagered. Total handle jumped 10 percent to $94,574,544. Attendance rose 5 percent, with a total of 254,820 fans admitted to the track. The figures do not include the running of Monmouth Park’s signature race, the Haskell Invitational, on July 29.

Nearly $9 million was wagered in track’s sports book—operated by William Hill—during the first 17 days of sports betting in June, according to figures released by the state.

SBTech already provides an online gaming platform in New Jersey for Churchill Downs (which operates under the Golden Nugget’s license) and facilitates sports betting at Resorts Atlantic City, the company said in a press release.