Held every Fourth of July since the 1970s, the Nathan’s Hot Dog Eating Contest has become an Independence Day institution.

The top dog of the annual July 4th contest is Joey Chestnut. “Jaws” is considered the GOAT of this event, winning 14 of the past 15 years.

Last year, the big “wiener” broke his own record, consuming 76 hot dogs and buns in 10 minutes. He is the overwhelming -1000 favorite to win his 15th title.

We take a look at the available bets and provide our predictions. We also see how many awful hot dog puns we can come up with below. The over/under is 4.5.

Chestnut Will be Top Dog Again 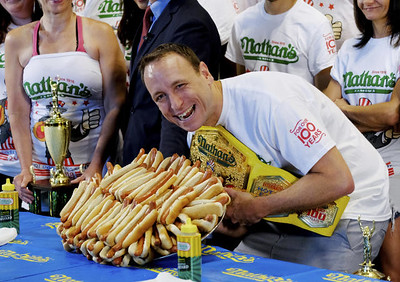 Last year, Chestnut broke his own record by eating 76 hot dogs and buns. Esper was second with 50. If Esper was a little closer it might be worth taking a flyer on with those odds.

A better wager would be who finishes second. Last year, Nicholas Wehry was six dogs behind Esper, and Darron Breeden was one behind Wehry at 43. Unfortunately, no sportsbook is offering that line. That’s too bad because there would probably be a lot more action. 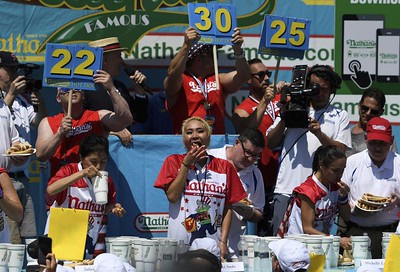 Last year seven-time champion Miki Sudo had a bun in the oven and couldn’t compete. Now after the birth of her first child, she is ready to return and reclaim her title. She is the overwhelming favorite at -5000. Michelle Lesco, who won last year in Sudo’s absence, is next at +1000.

These two are pretty much the contenders as no other female apparently can cut the mustard and are not listed in the odds. The third entry is “other” at +700.

Sign up to play at BetRivers Sportsbook and collect a 100% Welcome Bonus up to $250.

How Many Dogs for Chestnut, Sudo? 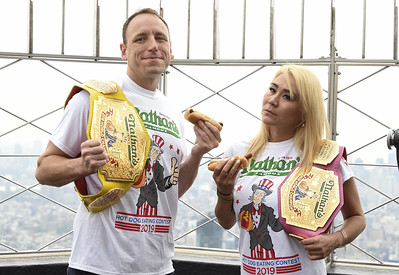 Take the over. Chestnut ate 76 hot dogs last year and 75 in 2020. I don’t think Chestnut will exceed last year’s total. He knows his top competition, Esper, didn’t even reach 60 last year, so there is no way he can “ketchup” to Chestnut.

Though Chestnut might act like a hot dog during the event, he is also a serious competitor. He will try to get close to 76, but I think he ends up at 75. 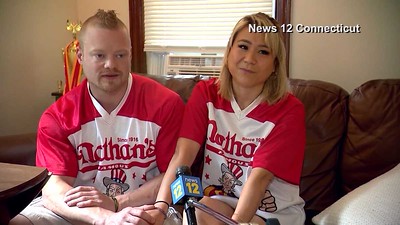 One of the more interesting prop bets is a head-to-head matchup between Sudo and Wehry, who are married. Sudo, the women’s champion is listed at -130 to eat more hot dogs and buns than Wehry, who is listed at -110.

Remember, this is a dog-eat-dog competition and only the best survive. Thanks, I’ll be here all week, tip your waitress.

Want to watch the Nathan’s Hot Dog Eating Contest live? Stream it on FuboTV and get in on all the action.