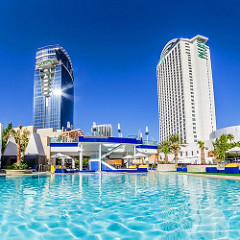 The purchase figured prominently in the total, as same-store revenues grew by only 2.7 percent, and adjusted EBITDA of $119.5 million missed the consensus estimate by $5 million, due again in large part to the Palms, which proved a drag on margins.

The Las Vegas locals giant reported a net loss for the quarter of $25.9 million.

“Red Rock investors will need to wait until 2019, and potentially second half of 2019, until Red Rock’s true EBITDA and margin potential is fully realized,” said Macquarie’s Chad Beynon.

Red Rock is planning to plow $146 million into the Palms to renovate the casino floor and the convention facilities and add two new restaurants and a café, luxury movie theaters and upgrades to the exterior and guest reception areas.

Palace Station is getting a $76 million makeover on top of a $115 million capital improvement program already under way that includes a new bingo hall and buffet, expanded parking and an exterior facelift.

The additional capex calls for the addition of luxury movie theaters, new restaurants, a resort pool, a new race and sports book and renovations to the poker room and casino floor.

“We’re very bullish on our Palace Station location,” said CEO Frank Fertitta “That’s where we started. It’s right in the middle of town. We see all these new things happening in Las Vegas with the expansion of the convention center and NFL football coming to Las Vegas as reasons to invest now.”