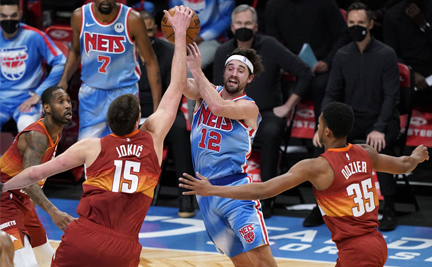 With the NBA Playoffs a month down the road, PointsBet oddsmaker Jay Croucher breaks down the Title and MVP futures liabilities. We also take a look at a hot ROY candidate.

With about a month left in the NBA regular season, we checked in with Jay Croucher, head of trading at PointsBet, to chat about the book’s biggest futures liabilities.

“PointsBet’s two biggest liabilities in the outright book are two teams that have remade themselves in-season—the Brooklyn Nets, and our hometown Denver Nuggets,” Croucher said. “The Nets, predictably, took a tidal wave of money following the (James) Harden trade, and similarly, bettors are believing in the Nuggets, who are undefeated since acquiring Aaron Gordon.”

Currently at PointsBet, the Nets are the favorites to win the title at +250. Brooklyn has the second-best record in the league, despite the fact that we’ve barely seen their triumvirate of stars on the court together at the same time. Understandably, there are some that bring up the question of whether Kevin Durant, Kyrie Irving, and Harden can all function together.

I’m on the opposite end of the spectrum when it comes to that discussion. These three stars are good enough to co-exist and carry Brooklyn to the Finals, regardless of chemistry or opponent.

The Nuggets come in with longer odds, +1400, to win it all. I loved the acquisition of Gordon, and can see this team making a Finals run. They have two stars in MVP favorite Nikola Jokic and Jamal Murray, who showed us what he’s capable of offensively in the bubble last season. Denver also has playoff experience, depth, and two high-level players in Michael Porter Jr. and Gordon, who will help tremendously come playoff time.

Speaking of the MVP, that race has been fun to track this season, especially from a betting perspective. The favorites have bounced all over the place. We saw LeBron James and Joel Embiid up there, before they went down with injuries.

Jokic is now the overwhelming favorite (-134) at most books, including PointsBet.

“The MVP story also stays with these two teams, with Jokic the clear favorite and Harden currently representing PointsBet’s biggest liability,” Croucher said. “Bettors believe in Harden making history—he would be the first MVP to be traded during the season—and don’t believe voters will hold his lackluster start to the season in Houston against him.”

The Joker is averaging 26.3 points, 10.9 rebounds, 8.7 assists. The Denver big man is also ranked 1st in PER, making his case for the award even stronger. The Beard’s numbers aren’t too shabby either, as he’s putting up 25.2 points, 8 rebounds, and 10.9 assists per game. Harden had been carrying Brooklyn since coming over until he recently went down with a hamstring injury.

Get sports betting insights delivered direct to your inbox. Subscribe to iGamingPlayer below!

We’re down to the final stretch of the season, so it’ll be fun to watch how these bets play out. Health is the obvious key for both Brooklyn and Denver if they want to contend for the title, so that’ll be something to keep an eye on.

As for the MVP award, it looks like it’s Jokic’s to lose, especially after Harden going down last week. The NBA Playoffs can’t get here fast enough.

Get NBA Single Game Parlay Insurance at PointsBet.com! Place your bet on any game with 4+ legs and get back up to $25 if exactly 1 leg fails. Receive up to 1 free bet refund daily!

The NBA Rookie of the Year race went from being a landslide to a compelling race after it was announced that standout rookie LaMelo Ball fractured his right wrist on March 21.

The injury opened the door for the likes of Anthony Edwards and Tyrese Haliburton to make a run at the award. Edwards has pushed forward as the favorite with about a month remaining in the season.

While his efficiency numbers aren’t near where they need to be for him to blossom into a true star, the No. 1 pick is scoring in bunches. Since the beginning of March, Edwards is averaging 23 points and over five rebounds on 43/32/78 shooting splits. Minnesota is nowhere near the playoff hunt, but Edwards has provided a handful of highlight reel plays.

Here it is, the Anthony Edwards dunk as heard on Timberwolves Radio Network. pic.twitter.com/SfKq3Xw7L9

The other rookie who’s seen his odds shrink is Haliburton. Less flashy than Edwards, the Iowa State product has shown glimpses of promise while producing on both ends for the Sacramento Kings. He’s averaging 13 points and five assists while shooting 47% from the field, 41% from beyond the arc and 86% from the free throw line.

Similar to Minnesota, Sacramento is struggling this season. Yes, Haliburton has cemented himself as a foundational piece to the roster, but the team is 22-31 and three games out of the final play-in game spot.

What Ball Brings to the Court

Team success is how Ball figures into this debate. While Rookie of the Year is not intertwined with team success, like MVP is, it helps the Hornets guard that Charlotte has been firmly in the hunt for hosting a playoff series this season.

Either way, Ball was a shoo-in for this award. Since the injury, Edwards and Haliburton have been able to build a case, but it still may not be enough.

Get a 10% Boost Token on any NBA Parlay at BetMGM.com. Minimum two legs. This offer is available throughout the 2021 NBA season.

After undergoing surgery, Hornets general manager Mitch Kupchak said that Ball could return before the end of the season.

“We don’t know if LaMelo is out for the season or not,” Kupchak said on March 26. “There is a possibility (of Ball playing again), just based on other players who have had this injury, that maybe he does come back for some portion of the year.”

If Ball comes back for any amount of time, I believe he ends up taking home the award. Even though he has played in 41 games, I don’t think Edwards or Haliburton have done enough to separate themselves from Ball, who was clearly the Rookie of the Year before the injury.

At +215, it’s worth a flier on Ball to hang on to the award. If he is able to return—and things are heading in a positive direction on that front—this becomes Ball’s award again.

Get a 20% Basketball Profit Boost on every NBA bet every Tuesday and Thursday through April 29 at PlaySugarHouse.com! Odds must be -200 or greater. Max bet $25, max additional winnings $250.