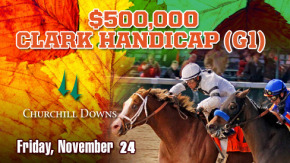 In honor of Black Friday, the kickoff to holiday madness and the spirit of wagering, we parody the Bee Gees’ famous hit song “You Should Be Dancing” as “You Should Be Gamblin’.”

Del Mar tosses in the $200,000 Hollywood Turf Cup. Three races worth nearly $1 million, augmented by Aqueduct supplying the Comely, Gio Ponti and Key Cents races worth another $500,000. That’s just because you have off the day after Thanksgiving.

Don’t forget college football on Saturday, pro football Sunday and Monday, the NHL, the NBA and the endless stream of action.

Value on the High End

We think of value meaning a low wager with enormous returns, like a lucky-stab four-horse combo producing more than $176,000 on the $1 superfecta at the Breeders Cup.

But, sometimes value exists on the high end. Watch for carryover pools at numerous tracks. They contain Pick 6, Pick 5 and Pick 4 propositions, Super High Fives and more. This menu pays more than one would expect because players have previously flooded the pools with losing wagers.

Take a Pick 5. You have to select the winners of five consecutive races, but can place as many entries as you want in a given race. Players opt for multiple selections in a fair number of those events, especially maiden races, because those horses have never won. The pool swells with money that has not been paid out. It bulges and can reach six figures in a matter of days. Value conscious horse players then jump in because they obtain a unique bonus—more money is being paid out in a carryover pool than has been wagered that day.

The flip side for these proposition bets is that many players consider the task impossible. How do you hit five races in a row? There is often one major surprise.

But, not always. Aqueduct Park in New York paid more than $2,000 on a Pick 6 carryover in mid-November, predominantly with favorites.

At Aqueduct, my buddy and I considered the Pick 6, but got busy with other wagers. We could have collected roughly $1,150 each by putting up $72. That would have been a payout of about 15-1 for hitting six straight short-priced horses, all of them between 2-1 and 4-1. Instead, we hit the six races separately and that $72 returned about $250.

Pick 4s, 5s and 6s may be costly, but consider finding a partner or setting aside $50 to $100 to take a stab at it now and then, especially if you feel you will bet the same amount of money separately over those races. It may be the best value at the track.