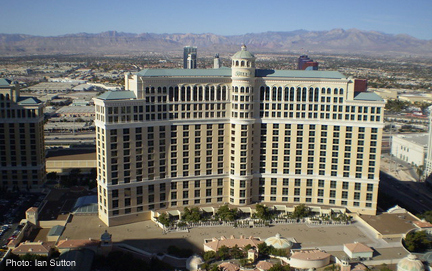 Private equity giant Blackstone is looking for marquee hospitality names. MGM Resorts International is looking to fund a mega-casino in Japan. This could be a match made in gaming industry heaven, which could result in the sale of two Vegas Strip icons: the Bellagio (l.) and MGM Grand. Other reports say a Circus Circus deal could be imminent too.

MGM Resorts International has had three of its independent directors on the case since January find ways to wring more value from the company’s extensive real estate holdings.

Their mission, according to MGM: “to enhance free cash flow per share, maximize value of the owned real estate and MGM’s equity holdings, preserve the company’s financial stability and position the company for continued growth” in line with the gaming giant’s existing strategy.

In part, it was a response to pressure from institutional investors like Corvex Management, which holds just under 4 percent of NYSE-traded MGM and whose managing partner, Keith Meister, a protégé of Carl Icahn’s, is one of the three.

Then there’s the “continued growth” part—Japan, to be specific. MGM wants to be in Osaka with partners with a killer resort that could cost upwards of $10 billion to develop.

The work of this ad hoc committee “is at the forefront of what MGM has been thinking about,” Brian Egger, senior gaming and lodging analyst for Bloomberg Intelligence, told GGB News.

And Meister has been in the forefront of that. “He approaches things from a real estate background,” Egger said, “and he’s taken an activist role.”

Blackstone likes hospitality assets. Its $154 billion real estate portfolio includes Hilton Hotels and Motel 6, to name just two. And they know the Las Vegas Strip. They acquired the Cosmopolitan five years ago as something of a distressed asset, got it at a 60 percent discount, and have made of it one of the markets biggest turnaround stories.

For Meister and company, getting Blackstone to the table to discuss a possible purchase of Bellagio and MGM Grand, the last two crown jewels of gaming MGM owns—10,000-plus hotel rooms and about 315,000 square feet of casino space between them—would be a deal for the ages.

They appear to be close, too, according to Bloomberg News, which cited unnamed sources last week in reporting that the two have reached an “advanced” stage in negotiations for a gaming REIT-style arrangement in which Blackstone would own the resorts and lease back their operations to MGM.

For MGM, “It’s simply that they have an opportunity to monetize the real estate, and there’s only three properties left (counting Circus Circus) to do this with,” Egger explained. “I think it’s a combination of an internal mandate to monetize the real estate and the activist investors who’ve been brought in to optimize the value of that real estate𑁋and to fund expansion, particularly in Osaka, and find a way to do this without over-leveraging. It’s about balancing competing objectives: to keep leverage within manageable levels and pursue Japan.”

It’s a motivated buyer as well, as Egger sees it. “If Blackstone were looking at attractive hospitality assets, certainly they’d be looking at these two. These would qualify.”

While nothing was known publicly last week about the terms of a potential deal, Egger, who crunched the numbers for a report Bloomberg issued in July, believes it could be worth more than $6 billion and possibly as much as $7 billion.

He looked at three benchmarks: 1) operations, which he values at 13 times EBITDA for Bellagio and 12.5 times for the Grand; 2) likely rental payments, which he estimates at two-thirds of underlying EBITDA, based on previous sales MGM negotiated with its MGM Growth Properties REIT, which owns most of the rest of the company’s gaming assets; and 3) the value of the real estate as a multiple of the rents, which he places at upwards of $3.9 billion for Bellagio and $2.9 billion for the Grand.

It’s a very big deal, in other words, one tailor-made to further MGM’s ambitions and those of Blackstone, which recently raised $20.5 billion for its ninth real estate fund, topping its predecessor by close to $4 billion.

They won’t be the last deals the Strip is likely to see either, especially looking ahead to the moves Eldorado Resorts is expected to make to digest its $17.3 billion acquisition of Caesars Entertainment.

“It would not be surprising to see more single-property transactions as opposed to the large corporate transactions,” Egger said. “We’ve certainly seen a lot of M&A in gaming, but mostly in the regional sector. Transactions of this size, like Caesars, those are unique.”

Meanwhile, Bloomberg also reported that a possible sale of Circus Circus to TI owner Phil Ruffin is being discussed. The 50-year-old Circus Circus, designed by Las Vegas legend Jay Sarno, is a outlier in the MGM Las Vegas Strip portfolio. Located at the north end of the Strip, Circus Circus is considered a “bargain” property, attracting low rollers and families.

Ruffin bought TI (Treasure Island) from MGM soon after that company bought Mirage Resorts, which developed TI and the Mirage on the same piece of land.

NASCAR All In With I