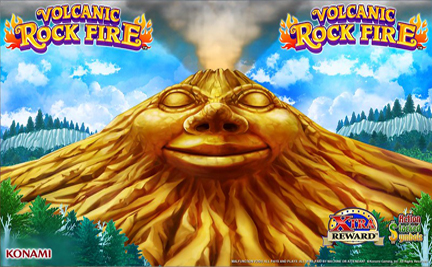 Welcome to another online adaptation of one of Konami’s most popular land-based titles, Star Watch Fire, centered around a giant volcano that doubles as a prize wheel above the reels.

The primary game is a five-reel, 25-line slot with several primary-game and second-screen bonus events. The game feature Konami’s signature “Action Stacked Symbols,” which stack on two or more reels to increase the chances of big wins. The primary game also includes a random feature in which a number of adjacent positions are replaced with the same symbol before a reel spin is initiated.

The main feature of the game centers around framed multi-spot “Prize” star symbols that land as instant awards of credits, a wheel spin or even one of four progressive jackpots. These stars land frequently during primary-game spins, and when matching with a reel spot framed in gold, randomly award a credit prize a Mini Bonus, Major Bonus, Mega Progressive, Maxi Progressive or “Press to Spin,” the latter turning the volcano on the top monitor into a bonus wheel.

Random credit prizes range from 50 credits to 1,500 credits, times the bet per line on the spin. Should the “Wheel” land on a framed spot—or when the star symbol lands on “Press to Spin”—the volcano on the top box spins around, stopping on one of the bonuses or progressives.

The bonus amounts and the progressive jackpots scale according to the bet. The more you wager, the higher the prize amounts. At the maximum 175-credit bet, the static bonus amounts are $80 (Mini) and $200 (Major). The progressives at max bet reset at $500 (Mega) and $5,000 (Maxi).

There’s also a free-game feature, in which all line wins and scatter wins are doubled. Three, four or five fireball symbols trigger eight, 12 or 20 free games, respectively. If the “Prize” star lands on a framed symbol or symbols, any line and scatter wins are paid and all reels with “Prize” are nudged until all positions on that reel award a bonus prize.

What a welcome! Sign up to play at CaesarsCasino.com, and your first deposit will be matched 100% up to $300 in casino bonus play. Deposit and then start playing your favorite slots today.

Amusingly themed around the civil defense and fallout shelter icons Americans lived with during the Cold War, Atomic Meltdown features all the traditional reel-spinning win symbols—single, double and triple bar symbols and four different “7” combinations. These classic symbols, though, are accompanied on the pay table by “Atomic Meltdown” wild symbols bearing multiplier amount of 2X, 3X, 5X and 10X.

To this strong basic setup, add the Atomic Meltdown feature. Randomly on a winning spin, the reels will re-spin up to five times to various winning combinations, with frequently landing wilds beefing up the win even more.

This is a fun, volatile game designed for the gambler. Beginning with the quarter denomination, you’ll find it only offered with high stakes, and as with traditional reel-spinners on the casino floor, while there may not be a hit every other spin, when the winning combinations do land, the credit awards can be huge.

Start with a larger bankroll than you would for a multi-line video game, and wait out the relatively small house edge.

You look like you’re in the mood for great rewards. Sign up for a new ResortsCasino.com account and unlock a 100% deposit match up to $1,000! Get started today.