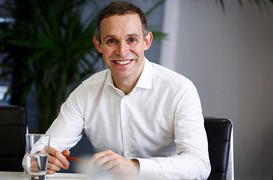 Paddy Power Betfair has merged with PokerStars to create the largest online betting and gaming company. Paddy Power—now Flutter Entertainment—owns about 54.6 percent of the corporate shares. The deal speaks to a wave of online gaming and sports betting in the U.S.; Flutter CEO Peter Jackson (l.) says the merger will “turbocharge” the company.

The name Paddy Power has a nice ring to it. Too bad the name will be relegated to the annals of history.

The owners of Paddy Power Betfair and PokerStars have agreed to merge in an all-share deal that will create the world’s largest online betting and gambling company by revenue. The combined company is poised to take advantage of the opening up of U.S. markets.

Following the merger, shareholders of Flutter Entertainment—the new name for Paddy Power—would own approximately 54.64 percent of the new company, with the Stars Group shareholders owning the balance.

The merger is the latest in a series of deals as the industry responds to the growing number of gamblers using online and mobile devices and the opportunity created by the relaxation of rules on sports betting in the United States, according to a Reuters article. Combined annual revenues would have totaled 3.8 billion pounds (US$4.7 billion) in 2018, making Flutter-TSG the largest online betting and gaming operator globally, the companies said.

Flutter CEO Peter Jackson, who will retain his role in the combined group, said the deal would “turbocharge” Flutter’s existing strategy and “provide world-class capabilities across sports betting, gaming, daily fantasy sports and poker, as well as greater geographical and product diversification.”

The new company will get a boost in the U.S. thanks to a partnership with Fox Sports which has the right to acquire 18.5 percent stake in FanDuel. Dublin-based Flutter merged its U.S. business with FanDuel last year.

Meanwhile, The Stars Group enhanced its UK operations with the purchase last year of Sky Betting & Gaming in a $4.7 billion deal.

Flutter has focused in North America as the U.S. market opens up to sports betting, and higher taxes and regulations take bites out of its British, Irish and Australian markets.

The merger is expected to deliver pretax cost synergies of 140 million pounds per year, along with opportunities to cross-sell products to one another’s customers in international markets, and also lower finance costs, the companies said. The deal expects to boost Flutter’s underlying earnings per share by at least 50 percent in the first full financial year following completion.