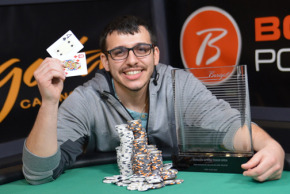 The Borgata Hotel Casino & Spa in Atlantic City offers five major live poker tournament events each year: the Borgata Open in September and four seasonal opens. These opens offer about two weeks of nonstop tournament play marked by some major high-stakes games and a championship event. These poker opens have made Borgata’s Atlantic City live poker room one of the most popular in New Jersey.

Though BorgataPoker.com hasn’t included online play into its opens, the site does give you a full schedule of online satellites for major events at the open. The satellites begin March 17 and offer a chance at winning seats to the opening event and the championship. Of course, you’ll have to travel to Atlantic City to play in the Spring Open, but the satellites also pay like regular tournaments.

BorgataPoker runs daily satellites with a low buy-in of $5 to win seats to higher-level satellites. That means you could parlay as little as a $5 stake into a big win in Atlantic City.

The main satellites for the opening event has a $45 buy-in and will run daily at 7:30 p.m. BorgataPoker estimates that one in 15 players in these satellites will win a $600 buy-in to the kick off event in Atlantic City.

For the championship event, which have a $2,700 buy-in, the qualifiers are a little more expensive. However, you can play a preliminary satellite for a $45 buy-in to get into the $400 Super Satellite that awards seats for the championship. The early qualifiers will be held daily at 7:30 p.m.

The Super Satellites will be held April 6-7 and April 13-15. These $400 satellites award seats to the championship to one in eight players.

All the satellite events can get a little confusing. You can check out the full schedule here.

The point is that for BorgataPoker players, there’s a chance to score some prime seats at some of the biggest poker tournaments in Atlantic City—and, it could all happen for as little as $5.

Join the fun at BorgataPoker now.