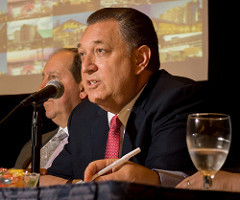 Boyd Gaming President and Chief Executive Officer Keith Smith said, “The acquisition of Lattner is a strategic opportunity to further diversify and expand our business. Lattner will provide us a valuable new avenue to access gaming customers, and a platform to participate in the expansion of distributed gaming. We are excited to welcome the Lattner team to Boyd Gaming, and look forward to establishing ourselves as one of the leading distributed gaming operators in the country.”

Boyd Gaming spokesman David Strow noted, “It’s worth emphasizing the whole Lattner team is coming on board with us. They have built a lot of great relationships with local tavern owners over the years. We have not had a presence in video gaming until now. By buying Lattner and joining forces it allows us to take part in that growth. We see it as a very complimentary business.”

According to the Illinois Gaming Board, adjusted gross receipts at Par-A-Dice dropped 32 percent since video gambling machines came online in late 2012, falling from $116 million in 2012—before the games were introduced—to $107 million in 2013—the first full year of video gambling terminals in bars and restaurants—to less than $79 million in 2017.