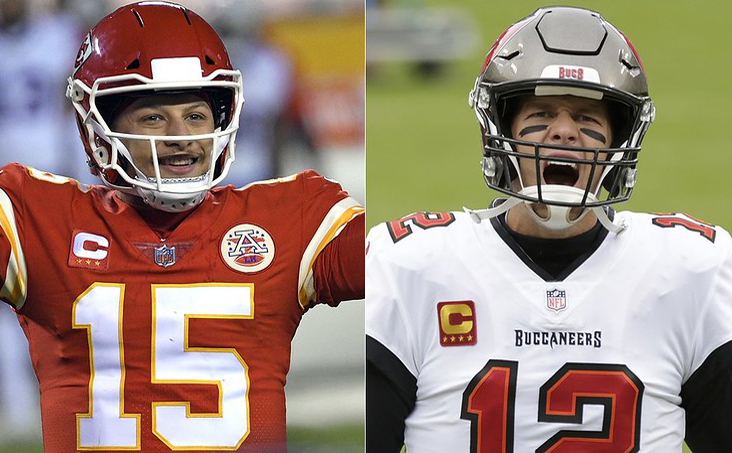 Betting on the Super Bowl this Sunday? Before the Big Game, let’s recap past Brady-Mahomes battles.

Tom Brady and Patrick Mahomes are getting ready for their Super Bowl LV matchup, in what will be the biggest quarterback age gap in Super Bowl history.

With 18 years, one month and 14 days between them, Brady, 43, is technically old enough to be 25-year-old Mahomes’ father.

Mahomes and the Kansas City Chiefs will be looking to defend their championship title and repeat, while the Tampa Bay Buccaneers quarterback will be striving to continue cementing his GOAT legacy.

Don’t forget to check out BetQL’s player prop projections and star ratings for the Super Bowl!

Brady is preparing with ocean-view sunset Instagram pictures hugging his wife, Gisele Bundchen, while Mahomes beat his adversary in posting a hype video.

The two quarterbacks have met four times before in their careers, including in Week 12 of this past season, where Kansas City won on the road, 27-24. The Chiefs are 3-point favorites heading into Super Bowl LV. Against Mahomes, Brady is 2-2 both straight up and against the spread.

In anticipation of this matchup, let’s take a look at all the times Brady and Mahomes have faced each other in the past, and how this might play into what happens at Raymond James Stadium on February 7. 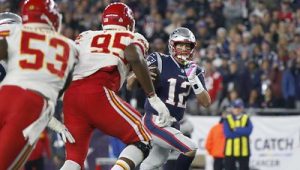 Brady got the best of Mahomes in their first meeting, in Week 6 of the 2018 season. Mahomes had just turned 23 years old when he was edged out by the New England Patriots and their then-41-year-old quarterback. Brady threw for 340 yards and one touchdown, while Mahomes bested Brady in this category, finishing with 352 yards and four touchdowns.

Despite winning, the Patriots gave up a major 24-9 halftime lead. They allowed the Chiefs to score 17 points in the third quarter and 14 in the fourth. The Patriots did come back and score 16 in the fourth quarter, with Brady leading a drive in the final minute that ended in the game-winning field goal.

Bet the first TD risk-free at BetMGM.com. Opt-in and place a First TD Scorer prop bet on the Big Game, and you’ll get back up to $20 in free bets if your pick isn’t the first in the game to get in the endzone! 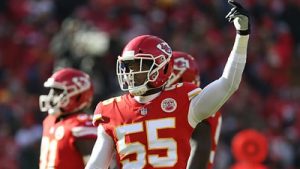 Sunday’s Super Bowl will be the second time Brady and Mahomes have faced each other in the postseason. The first was this AFC Championship Game. Again, Mahomes was the favorite here. The game was a back-and-forth instant classic, with the Pats surviving in overtime. Brady threw for 348 yards and one touchdown. Mahomes had 295 yards and three touchdowns.

The key moment in the game was Chiefs DE Dee Ford lining up offsides on a play where Brady threw what would have been a game-clinching interception for Kansas City. If not for that offsides, the Chiefs might be going for a three-peat on Sunday. The Patriots went on to beat the Los Angeles Rams for their sixth Super Bowl title.

Score $100 when you bet $20 at BorgataOnline.com. Paid in free bets for new customers only.

Mahomes went into this game the underdog and finished as the victor over Brady, by his biggest margin yet. The Chiefs’ QB racked up 283 yards with one touchdown in this Week 14 win, while Brady had 169 yards and one touchdown of his own.

Then the Chiefs, of course, went on to win the Super Bowl and Brady went on to move to Florida. Which brings us to… 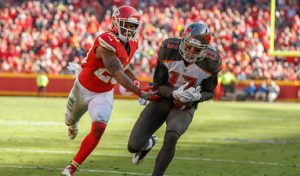 One thing to note about this game: The Chiefs jumped out to a 20-7 halftime lead, but it was Brady and the Bucs who dominated the second half, out-scoring KC 17-7.

Based on these matchups, I’m guessing the score in Super Bowl LV will be close, and we’ll see a quarterback duel for the ages. With all four games being decided by a touchdown or less, it’s probably wise to take the points on Sunday, especially if you can get the Bucs +3.5.

Get your Big Game deposit match at PlaySugarHouse.com. Bet $100 or more on the Big Game (Chiefs vs Buccaneers) to get an additional $400 in 1X Bonus Money!

For more key matchups and their implications for Sunday’s game, click here.

The lean here is the Bucs +3.5. Even with a lot of money coming in on the Chiefs, there’s some value if you can get Tampa Bay at more than a field goal playing at home.

Now, onto the main event:

Location: Raymond James Stadium in Tampa, Florida
Date and Time: 6:30 p.m. ET on Sunday, February 7, 2021
Where to Watch: CBS
Fun facts: The Bucs will be the first home team to play in a Super Bowl, and Brady will be the oldest player to ever play in the Big Game.

5 Bets to Make on th

Have You Tried These