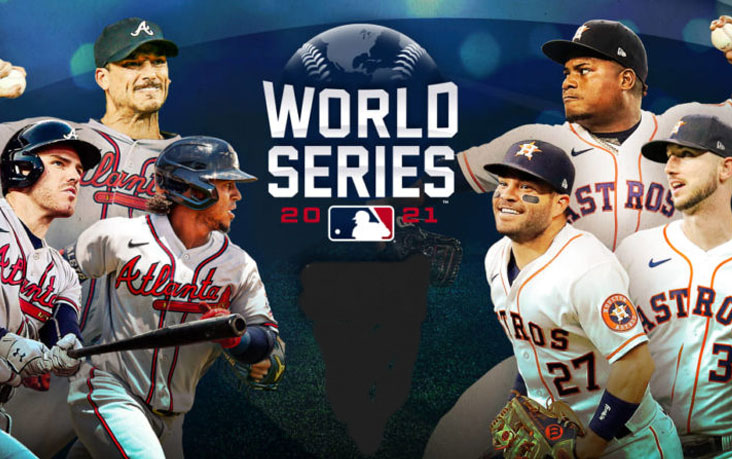 On the road to the World Series, the Atlanta Braves clipped the Houston Astros Tuesday to get an unlikely lead. The Astros made it one-all in Game 2.

The Atlanta Braves have been the underdogs in every playoff series they were in this postseason. So it’s no shocker they weren’t picked to win the World Series. Apparently being David to baseball’s Goliaths suits the National League Champions.

The Braves came into the World Series as a +120 pick to win at BetMGM, while their opponent, the Houston Astros, were the solid -145 favorite. Atlanta was also the second pick in Game 1, fetching +110 at PointsBet, while Houston got -130. The line moved from -140 to -130 in Houston’s favor as bettors solidly backed the Astros. BetMGM reported that 65 percent of the money and 46 percent of the tickets were on Houston.

In Tuesday’s opener, however, Atlanta looked like the chosen ones, defeating the Astros 6-2 to take an unlikely 1-0 series lead. They also made a little history in the process, becoming the first team in World Series history to score a run in the first three innings.

“Doing that on the road, getting those first at-bat jitters out of the way, it’s big,” said Atlanta outfielder Adam Duvall.” Obviously, this is a long series. It’s going to be a dogfight.”

In Game 2, Houston was again picked to win the game. The Astros were a –115 favorite at BetRivers, while the Braves were +105.

Get World Series Home Run Insurance at BetRivers! Wager on any player to hit a home run in any game. If your player doesn’t hit a homer but gets an RBI in that game, your stake comes back as a Free Bet up to $50.

But in Wednesday’s game at Minute Maid Park, Houston was able to slow down Atlanta’s momentum. The Astros jumped on Max Fried and won Game 2 of the World Series 7-2, tying it all up. The series heads back to the ATL tomorrow through the weekend. The Braves are currently favored at home with -111 odds for Friday’s game. 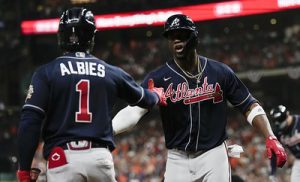 Coming into this matchup, it was Houston, not Atlanta, that was known for its offense. The Astros scored 67 runs in 10 playoff games, with six of their seven wins coming by at least five runs.

Braves pitching, however, limited the Astros to just one run in the first game. It was the lowest score for Houston in any of their 12 postseason games. Conversely, Atlanta’s six runs were the second most of any of their 11 playoff games. They scored nine runs against the Los Angeles Dodgers in the second game of the National League Championship Series.

Place a Same Game Parlay (SGP) bet with 4+ legs on any World Series Game at PointsBet and receive a Free Bet Refund up to $25 if exactly 1 leg fails. Receive up to 1 Free Bet Refund each day!

How Atlanta, Houston Got to World Series 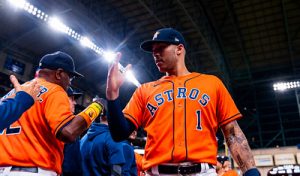 While Houston was expected to reach its third World Series in five years, Atlanta hadn’t been to the Fall Classic since 1999. The Astros began the season as the co-favorite to win the title at PointsBet. Along with the New York Yankees, they were at +600. Their odds lengthened a bit during the season going to +800.

The Braves opened at +1200 to win the World Series and jumped to +1400.  The team was at risk of missing the playoffs altogether. They didn’t have a .500 record until August, but got hot the last two months of the season, going 37-19.

Anyone who wanted to wager on these two teams to reach the series before the season began would have made some serious money. Putting the Braves and Astros as the final two teams was paying +6600 at BetMGM.

But neither one of these teams wowed their respective leagues. Houston went 95-67 in the regular season, while Atlanta finished 88-73. It’s the first time since 2015 that neither team had at least 100 regular-season victories.

Still, the Braves managed to survive and advance, despite long odds in each of their two previous playoff series. Of the four National League playoff teams, Atlanta had the longest odds to become National League Champions. At Caesars Sportsbook, the Dodgers were first at +105, the San Francisco Giants +350, the Milwaukee Brewers +400 and the Braves +575.

In the NLDS, the Braves were +120 to advance to the NLCS, while their opponent, the Milwaukee Brewers, were -145. After the Braves dispatched the Brew Crew in four games, they faced longer odds against World Series favorites, the Los Angeles Dodgers. The Dodgers were the -220 pick, while the Braves were +185.

Score $2 for every HR in a World Series game at BetMGM. Wager $25 on the moneyline for any game, and you’ll get a $2 Free Bet for every home run hit by either team, regardless of your wager’s outcome.