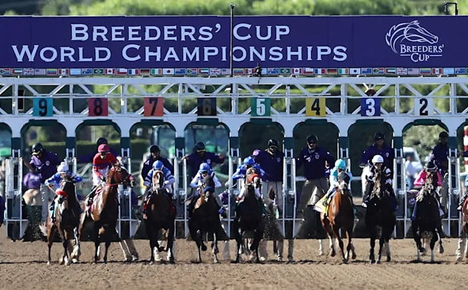 The Breeders’ Cup goes off Friday and Saturday, November 5-6. We break down the odds, favorites and top picks in racing’s biggest two-day event.

The Breeders’ Cup, horse racing’s richest two-day event, is set for Friday and Saturday, November 5-6, at Del Mar Racetrack in California. The 38th edition features five races on Friday and nine on Saturday. Of those, 14 are Grade 1 stakes with a prize pool of $31 million.

This event attracts quality horses from all over the world, some who qualified through the Breeders’ Cup Challenge, a set number of races in different divisions that allow horses to instantly qualify for the big race.

Fields in each race are limited to 14 horses, though some have as few as six. Horses that don’t immediately qualify can still get in by earning enough points in major races, or if they’re chosen by a panel of racing experts.

The Breeders’ Cup Classic is the marquee race, with a $6 million purse. This year’s field includes Knicks Go, Essential Quality, Hot Rod Charlie, Medina Spirit and Art Collector in a nine-horse field. So you have the Derby winner, the Belmont winner, a horse that finished third in the Derby and second in the Belmont, the top older horse in North America, and one of the hottest older horses in Art Collector.

The main event is the Classic the most heavily wagered event (see odds below). But don’t ignore the other races. Here are some best bets that should provide serious value.

Bet the Breeders’ at TwinSpires and you’re eligible for a bonus of up to $200. Get in the race this week! 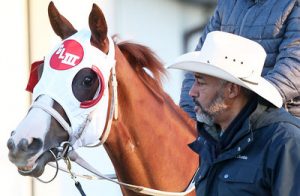 One horse making a quick impact is California Angel. The two-year-old is the daughter of 2014 Kentucky Derby and Preakness Stakes winner, California Chrome.

This filly is following in her father’s footsteps. California Angel has won two of three races, including the Grade 2, $200,000 Jessamine Stakes at Keeneland October 13, a “win-and-you’re-in” race for the Breeders’ Cup. Trainer George Leonard says he knew she was a winner from the moment he started working with her.

“I’ve trained a lot of horses, but I knew right away she was something special,” Leonard said. “I’ve only had her four months, but she does everything so easy. I have the best horse I’ve ever touched.”

California Angel is one of 14 entries for the Juvenile Fillies Turf, and is the second pick at 5-1. The favorite is Hello You at 3-1, but California Angel could easily pull off the upset.

Have a good feeling about California Angel? Get a $50 bonus bet match when you bet at least $50 on your new BetAmerica account! 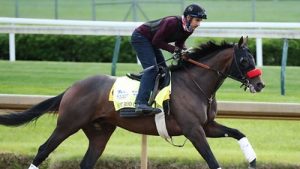 While the Breeders’ Cup Classic has been billed as a two-horse race between Knicks Go, the 5-2 favorite, and Essential Quality, next at 3-1, Hot Rod Charlie at 4-1 could be primed to pull off an upset.

Trainer Doug O’Neill worked out Hot Rod Charlie at Del Mar, and he’s been turning in some speedy workouts.

“I thought the work was visually impressive,” O’Neill said. “Charlie sat off his workmate and when (jockey) Flavien (Prat) called on him, he responded well. He galloped out good, and his energy was very high.”

O’Neill was also happy with the position his horse will start from on Saturday. Hot Rod Charlie pulled the No. 3 spot. 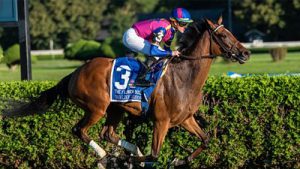 It’s a modern-day success story, and War Like Goddess can add to the legend on Saturday at the Filly and Mare Turf. The four-year-old daughter of English Channel, War Like Goddess wasn’t in high demand when she was presented at the 2018 Keeneland September Yearling Sale.

Agent Donato Lanni, however, saw a worthy project, and convinced George Krikorian to take a chance on her. The gamble paid off. They brought the filly along slowly, and she’s rewarded them with victories in five of her last six races. Now, as the 3-1 favorite, War Like Goddess has the chance to take the prestigious Filly and Mare.

“You never know what’s going to happen,” Krikorian said. “Donato thought this might turn out to be a good horse. The way she was built physically, she needed time to grow into herself.” 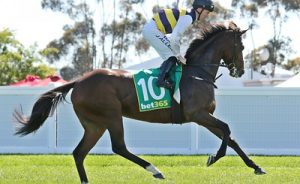 If familiarity is a plus, then Mackinnon might have a big advantage in the Juvenile Turf. The two-year-old has won three straight races, two of those coming on the same track he’ll run on Friday.

Modern Games is the favorite at 5-2, but the odds Mackinnon is getting, at 6-1, make him a very attractive pick. He’s also the son of 2015 Triple Crown winner American Pharoah.

His trainer, Doug O’Neill, said his recent workouts at Santa Anita have gone well. “He went really good,” O’Neill said. “Went six furlongs and the clockers gave him 1:14 and four-fifths. He finished up great, galloped out good, and cooled out well.”

Watch all Breeders’ Cup races on NBCSN, and the all-star Classic on NBC-TV at 8 p.m. ET Saturday, November 6. Here are the latest odds for the Breeders’ Cup Classic: