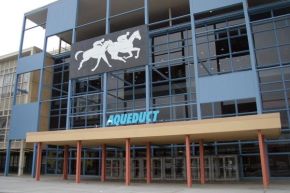 Whew! Did you gain any piece of that stunning $176,000 superfecta at the November 4 Breeders’ Cup? More on that later, but the racing world turns attention to its strong weekly lineups and a surface change at one of its storied ovals.

Aqueduct Racetrack in New York has added a second turf course to go with its renovated dirt track. This is expected to provide more turf races, which are easier to fill fields for, and to make the dirt surface more adaptable to winter racing. This could extend the life of its meet and provide an alternative should Belmont Park need renovating.

Aqueduct, which opened in 1984, celebrates its first week of 2017 racing with the $200,000 Red Smith Handicap on Saturday, November 11. The packed weekend lineup includes Laurel Park in Maryland, which offers five $100,000 races. Woodbine Racetrack and Del Mar add six-figure events to the Saturday lineup. Aqueduct sports the $200,000 Nashua and $100,000 Pumpkin Pie races on Sunday, while Woodbine’s $225,000 Coronation Futurity is the weekend’s purse headliner.

The racing world is buzzing over the events of the Breeders’ Cup. Favored Arrogate ran out of the money in the $6 million Classic, won by Gun Runner, and some races had some financial guns blazing.

The pace factor, something we’ve harped on much of this year, reared its head again in a number of events.

Bar of Gold, a 60-1 long shot, combined with Ami’s Mesa, Carina Mia and Skye Diamonds to produce a staggering $1 superfecta of more than $176,000. To nail this 5-14-1-12 combo, you could have taken the “easy” route—having your first child born on May 14, 2012 or somehow predicted the unlikely breakdown of favored Unique Bella. The favorite ran a scorching half-mile in 44.35 seconds and had nothing left for the stretch run. Bar of Gold, 0-15 in stakes races, rallied from next-to-last in a field of 14 to capture an exciting photo finish.

That was one of many highlights on racing’s greatest day, in which two other superfectas exceeded $20,000. Part logic, part hunch and a major part luck. Hope some of that found its way to you.

Check out iGamingPlayer.com’s Horse Track Directory to find a spot to watch the upcoming November races.

The rash of NFL quarterback changes in Houston, San Francisco, Arizona and Green Bay make those teams tempting to bet against early on, before the line reflects the situation. Case in point, Indianapolis winning outright against Houston as a 13-point underdog right after the Texans lost phenom-QB Deshaun Watson….Cleveland is 1-23 over the last two years. Both the Browns and 49ers are winless this year. If they played each other, it would probably end 6-6. Looks like the Broncos are in bad shape, the Raiders need their deep passing game back and the Eagles are for real. The Giants, as we said a month ago, have quit and underscored that by giving up 51 points at home to the Rams.

In the NBA, analysts say to keep an eye on mediocre teams, who have a habit of losing but covering generous lines against better teams that don’t really focus on them. In the NHL, some early-season high-scoring games occur, but defense steadily takes over as the season progresses.