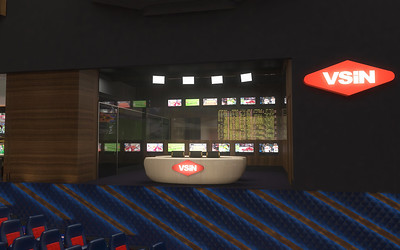 VSiN launched the sports betting broadcasting revolution in Las Vegas in 2017, almost 18 months before the Supreme Court overturned the ban on wagering, and recently opened a third studio in Circa (l.). Since then, they have expanded across the U.S. Last month, ESPN added its own studio in Las Vegas, capitalizing on the growth in sports betting.

VSiN didn’t wait for the 2018 U.S. Supreme Court ruling overturning a ban on sports betting to establish a foothold in Las Vegas with a new kind of network. The company launched in January 2017, when only Nevada and a few other states offered sports betting.

Indeed. Brian Musburger and his co-founders saw a need for credible and actionable news, data and analysis to help inform the sports bettor, at the time an unserved audience even in Las Vegas, the clear epicenter of s such activity. This idea spurred the first sports network of its kind, with a broadcast studio in the middle of one of the biggest sportsbooks in the resort at the South Point Casino.

“I was the equivalent of broadcasting a financial network from the floor of the New York Stock Exchange,” Van Nostran said.

But make no mistake, Van Nostran said. VSiN’s rapid growth—beyond Las Vegas and across the country—is a clear barometer of the interest in, and growth of, regulated sports betting in the U.S.

“VSiN was ahead of the curve, anticipating the trend prior to legalization, but it’s important to know that we’re still in the early days,” he said.

“That has quickly become one of our most popular live shows on digital and social platforms,” Morrison said.

What helps drive these developments is clearly sports betting’s role in sport these days. “Sports betting has become endemic to the overall experience of the sports fan. We have, for some time now,  recognized fans’ interest in sports betting as growing, and our coverage over the years has evolved to serve that audience,” Morrison said.

That growth has accelerated with the growth and legalization of sports betting across the country, all of which has created new opportunities to expand ESPN’s brand and audience and increase fan engagement.

Even before sports betting, broadcasters would make indirect references to odds. “There was an unspoken relationship,” Swissman said.

Now of course, all bets are off. Online sports betting companies sponsor games. Partnerships have evolved with media and sports betting such as BetMGM and Yahoo, Penn National and Barstool, Caesars and William Hill and ESPN, Fox and FOX Bet.

Heck, two of the four major pro leagues have teams in Las Vegas: The NFL Raiders and the NHL Golden Knights. The Raiders play in the new Allegiant Stadium. The city is bidding for the 2024 Super Bowl and will be the site of the 2022 NFL draft.

“It’s only logical that media companies would establish relationships in casinos,” Swissman said.

Having a studio allows us to cover those events year-round, Morrison said.

“VSiN takes seriously its role in educating consumers on everything from basic strategy to advanced betting concepts, as well as providing all the news and insights they need to make the smartest wagering decisions possible,” he said.

VSiN launched its broadcast during the 2017 Super Bowl, and from the getgo, a handful of broadcasters’ streamed live coverage five hours a day. Today the network broadcasts 24 hours each day, delivering more than 100 live hours each week from studios across the country, including three in Las Vegas (South Point, Circa, Mandalay Bay), and one each in Atlantic City (Borgata Hotel Casino & Spa), Chicago (Des Plaines Rivers Casino), Detroit (MGM Grand) and Denver (Empower Field at Mile High).

VSiN broadcasts The Lombardi Line with the former NFL executive live every weekend from Borgata. Danny Burke hosts Rush Hour every weeknight from Rivers Casino, while analyst James Salinas is live on Betting Across America each week from Empower Field at Mile High.

“In addition to this cross country build out of our studio presence, VSiN has significantly expanded its distribution footprint over the past couple of years,” Van Nostran said.

Recognizing that in-game betting will change the way fans watch sports, VSiN has inaugurated what it says is s groundbreaking product to capitalize on the expected growth of wagering after the start of a game or match, Van Nostran said. “BetCasts delivers real-time reporting of live odds on air as they happen, analyzing the events behind those changing lines,” he said.

VSiN has produced BetCasts for the XFL and English Premier League through its partnership with iHeart Media, but perhaps the most ground-breaking example of the in-game trend can be seen in VSiN’s Prime Time Action, powered by DraftKings. Hosted by Gill Alexander and in-game betting experts, this show airs Monday through Friday from 7 to 10 p.m. on MSG+ in New York.

This show gives viewers an advantage by combing expert analysis with actionable data to inform wagering decisions in real-time.

“We expect to continue expanding our footprint to bring information to the growing number of sports bettors around the country,” Nostran said. We think these markets are all different and should be covered as such.”

For ESPN, the focus at the moment is to serve fans in legalized sports betting states is the rollout of link integrations across ESPN digital platforms, connecting fans to sportsbooks from Caesars’ sports betting partner, William Hill, and DraftKings, Morrison said. “At the same time, we’ll continue to serve fans interested in sports betting with our growing slate of content that is available to them across our platforms.”

VSiN and ESPN have a lock on the market in Las Vegas. But what of networks like Fox Sports creating a studio environment in Las Vegas or elsewhere? Could be, Swissman said.

“But FOX Bet would have to establish a relationship in Las Vegas first,” he said. “It makes all the sense in the world. But I am not sure now is an ideal time until volumes return and bettors travel to Las Vegas.”

Atlantic City may be a wise choice for other broadcast studios. “Any sort of big population, dense market destination with sports teams around it, makes sense for a potential location,” Swissman said. “But I am not sure you want a bevy of studios across the country.”