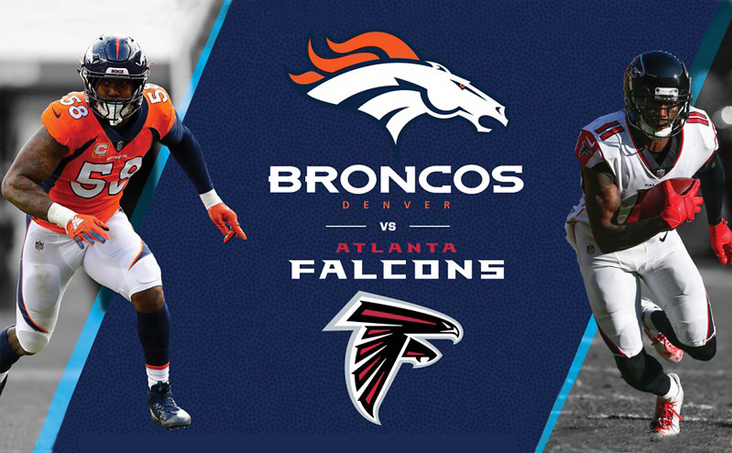 In Week 9, the Denver Broncos and Atlanta Falcons will face off at Mercedes-Benz Stadium in the Big A. This one could be a game-changer for the two teams as they vie for a playoff spot.

Despite their recent win to go 2-6, the Atlanta Falcons (+2000) are considered long shots to make the playoffs.

The Denver Broncos’ latest win saw them cover for the second time in three games. They had failed to cover the spread in four of five games prior to the new trend.

All season, we’ve been waiting for this talented Atlanta Falcons team to reach their full potential. Before a 25-17 victory over the Carolina Panthers last Thursday, all the Falcons have done is blow late leads. They entered the game with a 1-6 record, but if they had finished off certain games, then they’d be 4-3. There will be a lot of talk about missed opportunities for this team if they don’t get back into the playoff picture, but as things stand now, they’re 2-6.

Atlanta (+2000) is considered a long shot to make the playoffs. That being said, the talent is there, especially on the offensive side of the ball. Matt Ryan is still in the top-half of NFL quarterbacks and has two All-Pro talents in Calvin Ridley and Julio Jones to throw the ball to. Right before halftime of their Week 8 win, Ridley went down with a foot injury and is considered questionable for Sunday’s contest. There’s something to monitor.

Todd Gurley, while not the player he once was, is still producing at a serviceable rate. Gurley has rushed for 531 yards and eight touchdowns on the season, putting him on pace for a very solid campaign. If the Falcons are going to make a run, they’re going to have to do it now, and a matchup with a below .500 team is the perfect place to start. Expect their offense to push the ball down the field early and often to try and take advantage of this banged up Denver Broncos’ defense.

See who pro bettors love today at BetQL.co. Get all of BetQL’s best bets for the upcoming NFL season! Dating back a full calendar year, its five-star (max-value) bets have won 61% of the time!

Broncos Are Hanging Around

For most of their game against the Los Angeles Chargers, the Broncos looked overmatched. With seven minutes to go in the third quarter, they fell behind 24-3. Things looked lost. Then, they started to chip away with some big runs by Phillip Lindsay, including adding some timely stops on defense.

Drew Lock had his defining moment as quarterback of the Broncos last week. Down six with 2:30 to go, Lock led the Broncos on a 14-play, 81-yard drive to win as time expired. Lock finished with 248 yards and three touchdowns to go with an interception. While those numbers look pedestrian on paper, the comeback was huge for him and this Denver team that has to feel better than their record indicates to this point.

The win saw Denver cover for the second time in three games. They had failed to cover the spread in 4-of-5 games prior to the new trend.

Denver now sit at 3-4 on the season and are right in the middle of the AFC playoff race. Of course, they’re going to need to continue to stack some wins together, and a game against the two-win Atlanta team would be the perfect opportunity to build. Following their game with the Falcons, the Broncos play the Las Vegas Raiders and Miami Dolphins, two teams who figure to be neck and neck with them down the stretch. This string of games is very important to their playoff hopes.

The Broncos (+620) are hanging around in the playoff conversation.

Get the latest and greatest in sports betting insights each and every week. Subscribe below to iGamingPlayer.com today!

Both of these teams feel that they’re better than their record would indicate, as the two have lost some close games. For the Broncos, they lost to the Tennessee Titans and Pittsburgh Steelers by a combined seven points in their first two games, and those two teams have proven to be bona fide playoff contenders in the AFC. They feel they’re near that level.

The Falcons have blown three games in which they were given a 97 percent chance to finish off. If they had won those games, there would be a whole different vibe around this team. With these squads having wasted opportunities, it’ll be interesting to see how they respond coming off of wins.