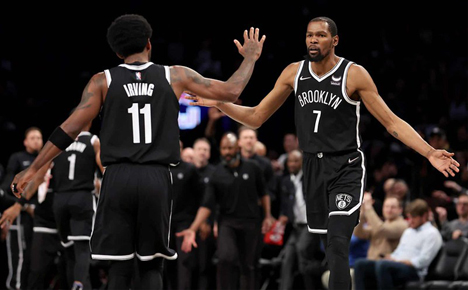 The preseason NBA championship-favorite Brooklyn Nets have the third-best odds to win the title.

Let’s face it, the Brooklyn Nets have never been an example of consistency. It wasn’t that long ago this team was touted as the next great NBA dynasty when James Harden was added to a roster that already included Kevin Durant and Kyrie Irving.

“The greatest combo of stars ever” was spreading around NBA Twitter faster than a Ja Morant highlight.

That whole pairing as we know it now though, lasted 16 total games on the court together before it was broken up. Injuries and part-time players were just the tip of the iceberg as the preseason favorites to win the NBA title now sit preparing to fight for their playoff lives in the play-in tournament. 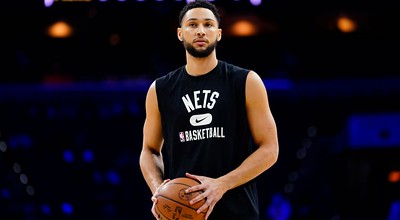 The Nets will always be one of the great “what-ifs” in NBA history, given that we never really got a true chance to see what their original Big Three would look like. Now, they wait for the replacement piece for Harden. Ben Simmons’ debut is still very much up in the air. It’s pretty fair to doubt any sort of legitimate run from this team in the playoffs.

Even Irving had tempered expectations when asked if he thinks this Brooklyn team has enough to win an NBA title this season:

“We’ll see,” Irving said, per ESPN’s Nick Friedell. “We’ll see, man. You can’t predict the future as of right now. Any time I try to do that — God has a way of humbling me. I’m just going to take it one day at a time.”

In normal circumstances, the Nets would still be looked at as a contender, even with Simmons essentially not part of the equation. When you have Durant and Irving on your roster, that’s not unreasonable.

But the reality here is different given the rollercoaster of a season. Have they shown you anything that makes you confident in a futures market for them?

That’s just the environment around this organization right now. Of course, if you have an NBA championship ticket already, fingers crossed. But, if you’re in the boat of people that don’t, there’s not a lot that would sway you to join those already sweating this out with their fingers crossed on a miracle Nets run.

Even though they still have the third-best odds to win the title (+750 consensus), the path to just the Eastern Conference Finals is a gauntlet. Sneaking in as a No. 8 seed would put them up against some seriously long odds, even with the fact that this team is at least better than that on paper.

But as we know, “on paper” means very little when the games are actually played.

The Nets made the Simmons trade thinking long-term, with this season essentially looked at as a bonus given everything that’s gone on. The clock keeps ticking on this era in Brooklyn, and it’s starting to look like another year will pass, with very few results.

Get today’s best bets and start betting like a pro at BetQL. BetQL analyzes every bet to help you beat the books. Start today for free! 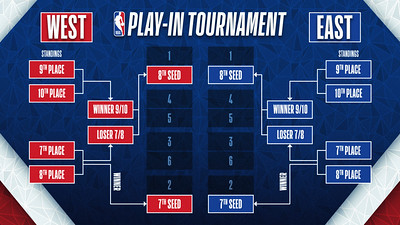 Q: How is the Play-In Tournament structured?

The team with the ninth-highest winning percentage in each conference will host the team with the 10th-highest winning percentage in the “Nine-Ten Game.” The loser of the Seven-Eight Game will host the winner of the Nine-Ten Game in a Play-In Game, and the winner of that game in each conference will earn the No. 8 seed.

Q: What happens to the winners of the Play-In Tournament?

The winners of the Play-In tournament will receive the seventh and eighth-seeded positions in each conference. Following the Play-In Tournament, the NBA Playoffs will commence with the traditional 16-team, best-of-seven series structure.

Q: When do the NBA Playoffs start?

The NBA Playoffs will start on Saturday, April 16, and conclude no later than June 19.

Bet risk-free up to $750 when you create a new player account at Tipico Sportsbook. Get in the game today.