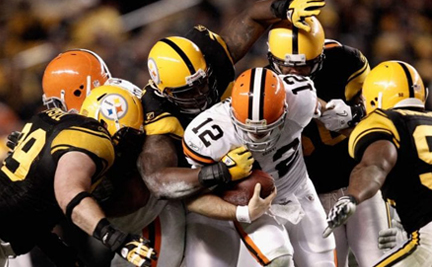 The Cleveland Browns (4-1) visit the Pittsburgh Steelers (4-0) at Heinz Field Sunday in a matchup of two scorching offenses.

Ben Roethlisberger has been playing like the frontrunner for the NFL’s Comeback Player of the Year Award. He’s thrown 10 touchdowns, leading the Steelers to convert an NFL-best 7.2 third down conversions per game. Rookie receiver Chase Claypool broke out in Week 5 with four total touchdowns.

The Browns are cooking with gas, too. New coach Kevin Stofanski has brought Cleveland from the basement of the AFC North to playoff contention. Baker Mayfield has regained his Heisman confidence and the Browns running game has been elite.

Both of these squads have impressed defensively. The Steelers have been a wrecking-ball unit, giving up 301.5 yards per game (third-best in the league) and 21.8 points per game (sixth-best). Browns defensive end Myles Garrett looks like a Defensive Player of the Year candidate. His 6.0 sacks rank second in the league and he leads the NFL with three forced fumbles.

Get your best bets for the NFL season at BetQL.co! Dating back a full calendar year, its five-star (max-value) bets have won 61% of the time!

Roethlisberger had his throwing elbow repaired last season, but you wouldn’t know it by the way he’s performed. He looks like a potential MVP candidate. Big Ben has led the Steelers to their first 4-0 start since 1979 when Pittsburgh won Super Bowl XIV over the Los Angeles Rams. He’s tossed 10 touchdowns (seventh in the NFL), while maintaining a 110.4 quarterback rating (fifth among starters). He has a 69.9 percent completion rate and has only thrown one interception all season.

The most impressive number of them all, however, is Pittsburgh’s league-leading 7.2 converted third downs per game (tied with the Philadelphia Eagles). Big Ben was 13-for-13 for 158 yards and two touchdowns on third downs against the Eagles last week. He has established an obvious rapport with rookie receiver Claypool, who caught 7 of 11 balls Roethlisberger threw his way against Philly, collecting 110 yards, three touchdown receptions, and one touchdown on the ground. 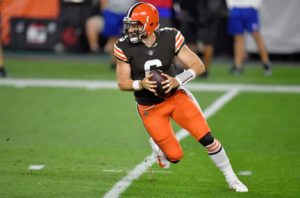 The Cleveland Browns have shocked the NFL with a comeback story as well. New head coach Kevin Stefanski has third-year quarterback Mayfield playing inspired football, leading the Browns to their first 4-1 start since Bill Belichick was Cleveland’s head coach in 1994. Mayfield has registered a passer rating between 100.0 and 117.3 and has made big passes when it matters most. He hasn’t been super accurate and he won’t blow you away with yards per attempt numbers, but he has played like a winning game manager.

Mayfield’s chemistry with superstar receiver Odell Beckham Jr. has finally developed and the results are impossible to ignore. OBJ has five catches in each of the last two games and 294 receiving yards on the season. He scored three times against the Dallas Cowboys two weeks ago, collecting 154 scrimmage yards in the process.

That’s still not the story. This Browns team delivers a vintage, punch-you-in-the mouth, dogpound-style offense. They average an NFL-best 188.4 rushing yards per game, and an incredible 196.3 in the last three games despite losing star back Nick Chubb to an MCL injury. Kareem Hunt has returned to his breakout Pro Bowl form from his 2017 rookie year, gashing opponents for 410 all-purpose yards and six total touchdowns. Hunt has averaged 5.0 yards per carry and has grabbed 73.3 percent of his targets. He’s a dual-threat dominator and he has more than capable backup, D’Ernest Johnson (6.0 yards per carry), backing him up.

If this game becomes a ground-and-pound affair like the battles between these two of yesteryear, the Browns may actually have the advantage. While Pittsburgh’s defense has been one of the most complete and intimidating units in the NFL this season—giving up 301.5 yards and 21.8 points per game (third and sixth-best, respectively—the Browns have the second-best defensive end and the best running game in football.

Myles Garrett’s 5.0 sacks trail only Los Angeles’ Aaron Donald so far in 2020, and his three forced fumbles lead the league. The fourth-year man out of Texas A&M has racked up a Donald-like collection of game-changing plays this season, most recently terrorizing veteran Philip Rivers to bring the Indianapolis Colts their first loss of the season. Rivers threw two interceptions and had a putrid 60.5 quarterback rating while making many costly errors (most notably an intentional grounding from his own end zone that led to a safety). Garrett has only made one Pro Bowl, but he could be Defensive Player of the Year if he keeps these performances up.

Couple Garrett’s aggressive defensive line play with the Browns’ fantastic offensive line and running game, and the Steelers have a real test in front of them Sunday.

You may want to ride the Brown streak once again!

It’s Not Too Soon