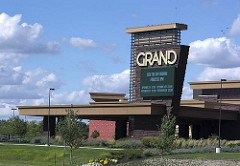 In its first big move since its largest operating division emerged from bankruptcy reorganization last month, Caesars Entertainment has agreed to pay $1.7 billion in cash to buy two Indianapolis-area racinos.

Centaur also owns the land under the tracks, leading to speculation that Caesars’ newly spun-off VICI Properties REIT could be a partner in the acquisition and could end up owning both properties.

Another plus is that the tracks could be eligible for live table games in 2021, according to a Bloomberg report cited by SunTrust Robinson analyst Patrick Scholes.

Macquarie gaming analyst Chad Beynon said the addition of live tables could boost EBITDA at the racinos a combined $15 million to $25 million a year. The two posted $400.7 million in combined slot revenue in 2016. Beynon estimated trailing 12-month EBITDA on that at an aggregate $120 million-$150 million.

“We believe Centaur Gaming and Caesars Entertainment will be a great combination,” said Caesars President and CEO Mark Frissora.

Centaur Chairman and CEO Rod Ratcliff said the merger “will further build on the successes and contributions of the properties for the benefit of our customers, team members, horsemen, community partners and financial stakeholders.”

The transaction, which requires approvals from the Indiana Gaming and Racing commissions, is expected to close in the first half of 2018.