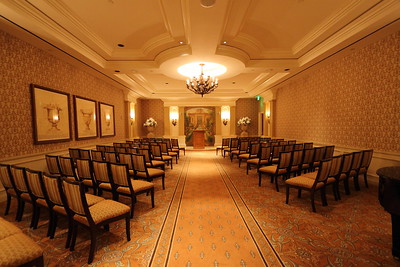 The 17.3 billion purchase of Caesars Entertainment by Eldorado Resorts is OK, according to the shareholders of both companies. Two separate but simultaneous meetings were held—Caesars at the Tuscana Chapel (l.) in Caesars Palace and Eldorado in Reno—that produced overwhelming numbers of votes in favor of the deal. And sale of Caesars’ properties is still on the table.

The deal reached to sell Caesars Entertainment to Eldorado Resorts in June was approved by shareholders of both companies last week during rare separate but simultaneous shareholder meetings. Caesars shareholders met at the Tuscana Chapel at Caesars Palace, normally a venue for weddings, while Eldorado owners gathered at the Eldorado Resort in Reno.

The shareholders were voting on a deal valued at $17.3 billion. Eldorado will pay $7.2 billion in cash and 77 million shares of stock to acquire 51 percent of the company, as well as taking on Caesars debt. The combination will create the world’s largest gaming company, but will also change the complexion of Caesars Entertainment, which will remain the name of the company.

The votes were overwhelmingly in favor of the deal. Shareholders in both companies approved by more than 99 percent.

More regulatory approvals are necessary and Eldorado CEO Tom Reeg, who will remain in place after the buyout, says the deal should be completed by the first quarter of 2020.

Meanwhile, Reeg told investors that the company still plans to sell at least one of the nine Caesars Las Vegas Strip properties. He said the $4.25 billion sale of MGM’s Bellagio to a Blackstone REIT gives him confidence that the value of Strip properties is high.

“That’s the tip of the iceberg,” he said. “We think there’s going to be others that are interested as well. We think that will improve the value of our assets, but we want to manage our leverage down, (which is) why we are talking about selling an asset quickly post-closing the transaction, but we’re not in a hurry to run and sell assets.”

Reeg said other sales could take place in the Shreveport/Bossier City, Louisiana markets, in Lake Tahoe, where the combined company would operate Montbleu, Harrah’s and Harvey’s, and in Atlantic City where the companies would operate four of the existing nine properties.

Even though the sale hasn’t officially closed, Reeg said he’s been consulting with Caesars CEO Tony Rodio about priorities for the two companies.

“You should expect that some of what Tony is tackling are things that we would have started tackling at closing, so we get to accelerate that a little bit and see the benefits quicker than we have in other transactions,” Reeg said. “We feel very good about what we’re buying and our ability to create value from those assets moving forward.