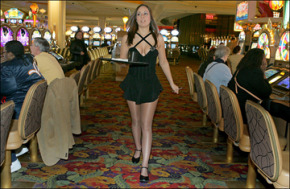 The system allows patrons on the casino floor to order drinks, which are then served by the waitresses. The system reduces contact between the customers and waitresses.

According to a report at Casino.org news, casino officials say the system is more efficient and allows gamblers to play rather than wait for drinks.

The waitresses, however, say that with less contact with customers, it becomes harder to determine if patrons are drunk and should be cut off.

Caesars Entertainment officials did not comment for the report.