Caesars Gets $400 Million From VICI 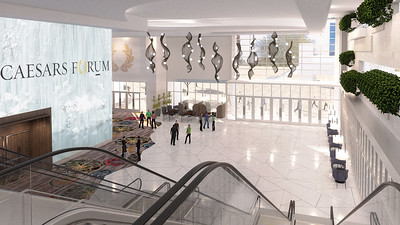 The funds came in the form of a mortgage loan secured by the gaming giant’s new Caesars Forum Convention Center (l.) on the Las Vegas Strip. VICI is also negotiating with Caesars to acquire 50 acres of prime Strip land for future development.

The five-year loan is payable at 7.7 percent interest and is secured by a mortgage on the new $375 million Caesars Forum Convention Center on the Las Vegas Strip.

The loan, which VICI said it funded with cash on hand, is seen as a balance sheet-strengthening move for Eldorado Resorts, which completed its $17.3 billion acquisition of Caesars in July.

The REIT said also it is negotiating a $103.5 million deal with Caesars to acquire 23 acres of developable land adjacent to the convention center and behind three Caesars resorts, Harrah’s Las Vegas, the Linq and Flamingo Las Vegas.

The acquisition, together with an additional 27 acres of undeveloped land behind three other Caesars resorts which VICI owns𑁋Bally’s Las Vegas, Paris Las Vegas and Planet Hollywood𑁋gives the REIT a full 50 acres which VICI CEO Ed Pitoniak has termed “the only large-scale opportunity to deepen the Las Vegas Strip at its center.”

VICI owns 29 casinos and racinos nationwide, including Harrah’s Las Vegas and Strip landmark Caesars Palace and 16 other casinos operated by Caesars under the Harrah’s, Horseshoe, Caesars and Harvey’s brands.