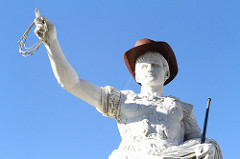 Caesars Entertainment has set new terms for the merger of the company with subsidiary Caesars Acquisition Co., clearing the way for a final end to the gaming giant’s 24-month-long bankruptcy saga.

The terms agreed by the directors of the two companies, pending regulatory and shareholder approval, provide for Caesars Acquisition shareholders to receive 1.625 shares of Caesars Entertainment for every share they hold. The deal features a requirement that the two entities merge by the end of 2017, although most expect that to occur sooner, given last week’s agreement.

In another key development, subsidiary Caesars Entertainment Operating Co., which controls most of the conglomerate’s casinos, announced it has entered into committed financing agreements for completing its restructuring and exiting U.S. Bankruptcy Court protection.

The operating company filed for Chapter 11 protection in January 2015, spurring lengthy battles with its many creditors over how to make good on some $18 billion of debt left from the 2008 leveraged takeover of Caesars Entertainment by private equity giants Apollo Global Management and TPG Capital.

Last month, U.S. District Judge A. Benjamin Goldgar approved CEOC’s reorganization plan, which cuts $10 billion of the debt and puts creditors in effective ownership of a new CEOC split into a casino and hotel operating company and a real estate investment trust.

Creditors also get a sizable stake in parent Caesars Entertainment, making the Caesars Acquisition merger integral to the plan.

Earlier this month, Caesars Entertainment reported a fourth-quarter loss of $435 million, compared with a loss of $39 million in the same quarter in 2015, most of it attributed to costs associated with the mammoth restructuring. Revenue corporate-wide actually increased 2.8 percent year on year to $3.9 billion, and cash flow was up 8.6 percent to $1.1 billion.

The company also has agreed to pony up $47.5 million to end its relationship with NV Energy as a retail customer of the Nevada electric utility.

The exit fee, if approved by the Nevada Public Utilities Commission, will be paid over six years, in 72 equal installments, and follows similar moves by Wynn Resorts, MGM Resorts International and Las Vegas Sands, which all have paid to leave the utility to shop for power on the open market.

The fees are designed so that NV Energy’s remaining customers are not forced to pay increased rates to compensate the utility for the lost revenue.