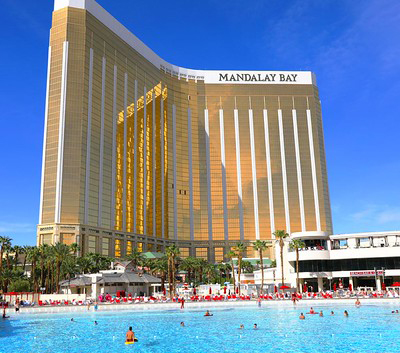 It may be no more than wishful thinking on the part of the two casino giants, though as it stands Governor Steve Sisolak’s closure order expires on April 30. The governor has not indicated if that will change, but he has emphasized that his first consideration remains the risks to health and safety.

Several of Las Vegas’ largest casinos have begun taking hotel reservations for May 1, despite a recent statement from Governor Steve Sisolak that he’s not ready to begin relaxing the Covid-19 restrictions that have all but shut down the state’s economy.

It was reported last week that resorts operated by Caesars Entertainment and MGM Resorts International𑁋18 in all, including MGM’s Mandalay Bay Convention Center and MGM Grand Garden Arena𑁋have been accepting reservations, although prospective visitors were being informed that the May 1 date could change subject to orders from the governor.

If he doesn’t issue such an order, it may not matter anyway, with travel at a standstill nationwide and fears of large public gatherings likely to persist.

Nevada’s largest industry was ordered closed on March 17 to try to contain the spread of the potentially deadly contagion, which is known to have infected more than 3,500 people in the state and killed more than 140.

The order is in place through April 30, and Sisolak has not indicated whether that would change. In a news conference last Tuesday night,

he said he will rely on doctors to advise him about the pandemic while considering factors such as rates of infection and deaths, the impacts on hospitals and input from business.

President Trump, meanwhile, facing what promises to be a difficult re-election bid in November, is anxious to reopen the battered national economy though the virus continues to spread and the U.S. death toll, the highest in the world at more than 36,000, continues to mount. Medical experts have been harshly critical of the reopening guidelines the administration released last week, and Sisolak appeared to address that in Tuesday’s media gathering.

“This is not going to be a political decision as far as when to open,” he said. “We’re going to take it slow and steady and listen to the doctors.”

In response to Trump’s push to reopening, several states have banded together to frame their own plans, including seven in the Northeast, the region hardest hit by the contagion, and California, Oregon and Washington. Sisolak didn’t say whether Nevada was asked to join the Western coalition, though he said he shares its goals and is in communication with California Governor Gavin Newsom.

He’s mainly engaged in trying to address the humanitarian crisis, he said. With an estimated one in three Nevada workers employed in the gaming and tourism industries, the state’s unemployment could end up the highest in the country. It’s estimated that 320,000 jobs are at risk, twice the number affected by the 2008-09 recession.

The state’s unemployment office has been swamped with filings for benefits, which have hit 10,000 a day, and has begun staggering phone and online claims by assigning different days by alphabetical order of claimants’ names. Sisolak said the state is adding staff to help with the crunch and that claimants who are unable to get through to the system initially will be paid retroactively.

The casino industry, the state’s largest employer, generated more than $12 billion from gambling alone last year, and analysts say if it remains closed for longer than a month, it could take a year or more to recover that money. Losses could exceed $30 billion over that time

The industry also is the state’s largest single taxpayer, and estimates put the state’s potential revenue loss from a protracted shutdown at upwards of $40 billion.