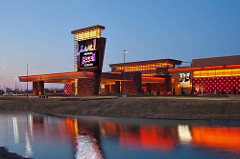 After battling to avoid paying a $50 million casino license transfer fee, Indianapolis-based Centaur Gaming announced it will pay the fee prior to or at the closing of a $1.7 billion deal for Las Vegas-based Caesars Entertainment to buy Hoosier Park in Anderson and Indiana Grand near Shelbyville. Centaur General Counsel John Keeler said, “It’s a fair statement that if it all closes, the state will get its $50 million.”

However, two years after the licenses were issued, in 2010, Centaur filed for Chapter 11 bankruptcy. The bankruptcy plan created new entities to oversee Centaur’s holdings, including transferring the license for Hoosier Park from Hoosier Park LP to Hoosier Park LLC. The $50 million transfer fee did not apply at that time because the arrangement was a result of Centaur’s bankruptcy—one of the few exceptions for waiving the fee.

In April 2011, Indianapolis Downs LLC also filed for Chapter 11 bankruptcy, and in 2013, Centaur acquired the license and rights to Indiana Grand for $500 million. The $50 million fee also did not apply to that transaction because it also involved the initial license holder, in this case Indianapolis Downs, filing for bankruptcy.

Centaur and Caesars have argued for months that the transfer fee should not apply in the current situation because of the bankruptcy restructuring. But the Indiana Gaming Commission has disagreed. Centaur then threatened litigation in a March letter to the commission, and Caesars threatened to pull out of a $90 million expansion project at Horseshoe Southern Indiana Casino. But since then, Caesars has moved forward with the project.

Centaur’s properties also include off-track betting parlors in Indianapolis, New Haven and Clarksville, which will be transferred to Caesars as part of the acquisition. Last year the Anderson and Shelbyville casinos generated $480 million in casino revenue.

Caesars officials said the company will invest an additional $8 million in the two racinos by the end of the year, including table games and skybox suites, plus another $41 million in IT infrastructure, primarily to integrate the Centaur properties into Caesars’ Total Rewards points system.