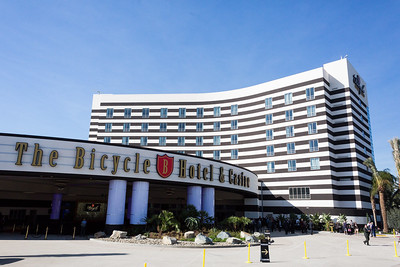 New cardroom rules proposed by the California Bureau of Gambling Control last week have venues like the Bicycle Hotel and Casino in Bell Gardens (l.) complaining they will be forced to close if the rules are enforced. The California Nations Indian Gaming Association disputes those dire consequences, saying the new regulations merely reinforce already existing laws that weren’t enforced.

The Golden State of California has 72 card clubs, many of them in urban centers where tribal casinos don’t operate. Examples include the Bicycle Hotel and Casino in Bell Gardens and the Hustler Casino in Gardena.

In addition to poker, these clubs also operate pai gow poker, blackjack and baccarat—so-called “California games.” If new rules proposed by the state Bureau of Gambling Control are adopted, card room operators say, playing the games will be so complicated, players will go to tribal casinos that aren’t bound by such rules.

The bureau has been holding hearings on the proposed new rules for about a year, but kept the information close to the vest. All the while, card clubs accused the bureau of hauling water for Indian casinos, which have long held that card clubs violate the state constitution and profit from “illegal gaming practices,” as former California Nations Indian Gaming Association (CNIGA) Chairman Steve Stallings called it several weeks ago.

The California Gaming Association (CGA), which represents many of the card clubs, called the proposal “a clear attack on the card room industry and a message that the bureau is intent on eliminating this lawful $5.6 billion industry and putting 32,000 Californians out of work.”

Tribal casinos and casinos in Nevada offer card games in which a dealer who works for the casino also acts as the banker. California, by contrast, does not allow commercial card clubs to have a financial stake in the outcome of the game. So at most card rooms, an employee serves as the dealer and a representative from a licensed third-party business is the banker, who collects from the losers and pays the winners. Card rooms generate revenue by collecting a fee from each player during each hand, with the fee based on the bet limit at each table.

Under the new rules, players would be required to take turns acting as the banker, i.e. “the house.” They would have to rotate every two rounds, which would create delays between rounds, meaning casinos would collect fewer fees per hour. In addition, many players would away shy from being the banker, and might go to a tribal casino instead. Players who refuse to be the “house” wouldn’t be able to play. The game would stop if no players accept being the banker.

The bureau held hearings on the new rules at a December 18 hearing in Sacramento. The rules have been introduced informally, but for them to be adopted, the bureau must hold more hearings and do an economic impact report.

Before the hearing, CGA President Kirk Kirkland held a press conference in which he declared, “It’s so disruptive,” and introduced several card club owners to speak, including the owner of the Capitol Casino in the state capitol, who said his business would be killed by the regulations.

“I’d be deeply concerned if they used this as a starting point,” Kirkland told the Sacramento Business Journal. He added, “We would have to go into an injunction to stop them. Our industry, our communities couldn’t survive.”

Several weeks ago, the CGA released the results of a study that estimated the card club industry supports 32,000 jobs and generates $1.64 billion in wages and benefits and $500 million in state and local taxes.

Last week, the recently elected CNIGA Chairman James Siva issued this statement: “The card clubs are engaged in a desperate attempt to mislead regulators and the public. We commend the Attorney General and the Bureau of Gambling Control for moving forward with regulations that will clarify current law and ensure a well-regulated gaming industry in California.”

Siva added, “Nothing in the proposed regulations would cause a California card room to shut down. These regulations merely clarify existing law that limits the types of gaming allowed in California. We look forward to the Bureau of Gambling Control moving forward with the formal rule-making process.”

Tribal criticism of card clubs began intensifying after 2007, when former state gambling enforcement chief Robert Lytle issued far less onerous rules for the card clubs in a memo. Those rules would be superseded if the California Bureau of Gambling Control’s proposal takes effect.

Lytle later left the state service and almost immediately began working as a consultant for one of the casinos that he once had regulated. In May 2016, he lost his gaming license and ownership in two card clubs, part of an agreement worked out after the Bureau of Gambling Control accused him of obtaining confidential information for his consulting business from an agent in the bureau.

Richard Schuetz served four years on the California Gambling Control Commission, later was executive director of the Bermuda Casino Gaming Commission, and currently owns Schuetz LLC, a gaming and regulatory consulting entity. He told GGB News, “The card club industry ought to put up a statue to Lytle. He wrote a letter redefining how card games should be treated. Ten days later, he retired and became a consultant. As a result of his corrupt behavior, he can no longer set foot in the industry. His participation in the industry is an embarrassment, and the card rooms should be ashamed they owe so much to him.”

Needless to say, Schuetz is not sympathetic towards the card clubs’ plight. “It’s absolutely time that they were forced to obey the law,” he said. “What’s gone on since Bob Lytle’s infamous memo is ludicrous. The card rooms continually rely on talking about all the jobs they create. Hawaiian Gardens has gone beyond itself to prove itself corrupt. You’ll see that about 85 percent of the city’s budget comes from that card room.”

Schuetz added, “When they have meetings with the regulatory authorities, the card rooms bring the dealers and minority people, and it’s like ‘Don’t forget the jobs!’

“It’s not an issue of jobs. It’s an issue of the law. It’s like saying, ‘Yes, meth is a terrible drug, but think of all the jobs that are created in the emergency rooms, and if we stop it, those jobs will stop.’ It has to do with the law. They have clearly been outside of the law.”

Schuetz says California’s state regulatory entities “have this underpinning of corruption.” The existing laws are not enforced against the card rooms, he says, “because there is a huge amount of discrimination against the Indians.”

When he served on the commission under Governor Jerry Brown, Schuetz said, “I was terribly uncomfortable with the absence of ethics and I was terribly critical of the card rooms. There have been more federal raids on card rooms than against any gaming segment in the U.S. It’s a group that cannot behave. This is one reason the Indians don’t want them involved in sports wagering. These guys can’t play by the rules, and the main thing in sports betting that must be maintained is integrity.”

Several card clubs are huge taxpayers in their host municipalities, including the cities of Commerce and Hawaiian Gardens. Edgar Cisneros, city manager of Commerce, recently told the Los Angeles Times, “It’s going to devastate a lot of working-class communities, not just the city of Commerce.” The Commerce Casino, which offers 240 tables, is responsible for 45 percent of the city’s tax revenues.

One of the gaming tribes that went to court to fight the card clubs is the Yocha Dehe Wintun Nation, which owns Cache Creek Casino Resort in Yolo County. The tribe sued the state, saying it was not enforcing its own rules against banked games. It also argued that this violated the state-tribal gaming compact. Last summer, the case was dismissed, but the tribe is appealing to the Ninth Circuit Court of Appeals.

Last week, the tribe issued this statement about the new proposed rules: “Yocha Dehe Wintun Nation applauds Attorney General Xavier Becerra and the Bureau of Gambling Control for proposing regulations requiring cardrooms to follow the law the State Legislature and California voters have put in place. This is an important first step to have state law enforced and to stop the play of clearly illegal banked games in card rooms in our communities.”

Several weeks ago, a consortium of 18 gaming tribes began gathering signatures for a state constitutional amendment referendum in 2020 that would legalize sports betting in the state. Their amendment mentions gaming tribes and racetracks—but quite deliberately omits card clubs.