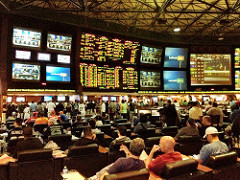 Although sports betting is illegal in most U.S. states, California is anticipating that U.S. Supreme Court might possibly change that—and one lawmaker in the Golden State wants to be ready.

California Rep. Adam Gray, a longtime champion of gaming expansion in the state, has introduced a bill with an eye towards the Supreme Court’s review of the federal law, which allows some states to have sports betting, and forbids others. Although the court has agreed to review the case, it has not yet said when during the next session it will do so. The Supreme Court returns to work in October.

Gray last week told Legal Sports Report: “I am pleased to see the US Supreme Court has shouldered the burden of bringing legal clarity to the issue of sports wagering and the rights of states under the United States Constitution.” That the high court chose to review New Jersey’s lawsuit to try to get the federal ban overturned caused Gray to introduce his bill, AC 18, which is actually a proposed constitutional amendment that would be forwarded to the voters.

The law New Jersey is challenging, and for which several states have filed friend of the court briefs is the 1992 Professional and Amateur Sports Protection Act (PASPA.) Gray’s constitutional amendment would only go into effect if the high court rules in favor of New Jersey.

California’s gaming tribes are already crying foul, saying that their compacts with the state guarantee them a monopoly on Las Vegas style gaming.

The tribes’ lack of enthusiasm for such a measure could make passing an amendment problematic given that both houses of the legislature would have to pass it by a two-thirds majority to send it as a referendum to the ballot box.

Gray counters that his state’s residents are “already betting through unscrupulous websites in foreign countries” and believes “it’s time to (…) crack down on illegal and unregulated online gaming and replace it with a safe and responsible option which includes safeguards against compulsive and underage gambling, money laundering, and fraud.” He says his goal is to bring the practice “out of the shadows.”

If the U.S. Supreme Court strikes down a federal law banning sports betting in a case scheduled for early 2018, Mississippi will be ready to allow sports betting on teams and events, regulated by the state gaming commission. A bill passed by the legislature and signed by Governor Phil Bryant legalizes fantasy sports–and sports betting.

State Senator Sean Tindell said if the Supreme Court allows states to offer sports betting, and Arkansas offers it while Mississippi does not, “it will close the casinos in Tunica. I don’t want to give any reason for a person to go to a casino in a neighboring state instead of in Mississippi.”

State Rep. Scott DeLano, a sponsor of the bill, said although sports betting won’t solve all of Mississippi casinos’ problems, “it will provide entertainment options that might attract people to casinos here in Mississippi.”

Mississippi casino revenue, along the Mississippi River and the Gulf Coast, has slowed in recent years, primarily because of increased competition in Arkansas and Louisiana. State casino revenue in 1993, the first year casino gambling became legal, was $33.3 million. In 1994 it was $95 million, and in 1995 revenue reached $128.8 million.

State Economist Darrin Webb said the impact of sports betting would be much less than the early years of casino gambling. “I can’t imagine it having anything near the impact of the casinos,” he said. According to the University of Nevada at Las Vegas, sports betting accounts for less than 1.4 percent of the state’s total gaming revenue.

DeLano said the busiest time of the year for sports betting is driven by the National Football League playoffs and Super Bowl in January and February, which coincides with the slowest time of the year for Mississippi casinos. He said sports betting at Mississippi casinos could attract people who also would play other casino games and spend money on food and other entertainment.