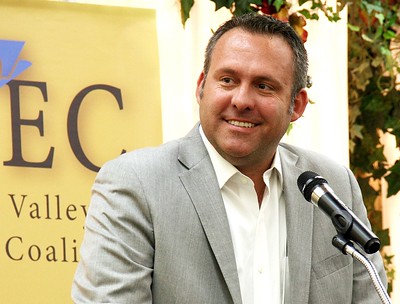 A coalition of 18 tribal casinos in California have all but abandoned efforts to collect nearly 1 million signatures to qualify a sports-betting measure for the November 2020 ballot. The bill pushed repeatedly by Rep. Adam Gray (l.) were defeated by the coronavirus shutdown.

Proponents for a measure that would legalize sports betting in tribal casinos and racetracks in California have stopped collecting signatures, after nearly reaching the threshold for the November ballot.

The coalition of 18 tribal casinos and racetracks in the Golden State were forced to stop by Governor Gavin Newsom’s executive order shutting down the state on March 16.

The measure the tribal coalition came up with would have elbowed out the more than 60 commercial card clubs in the state and also expanded the types of table games that the tribes could offer. It would not authorize online sports betting. All wagers would have to be made on the premises of a brick and mortar tribal casino, or a racetrack.

Most gaming tribes fear any type of sports betting that doesn’t bring patrons to their physical operations.

In 2018 Californians for Sports Betting started an effort collect signatures to put a measure that include card clubs. It died in the water due to no interest by donors.

Last November the 18 tribes began their effort to get nearly one million signatures by April of 2020. They collected close to that number when the coronavirus descended on the state.

That hasn’t stopped the cardrooms from gathering money for a campaign just in case something miraculous happens that the coalition makes the deadline.

California’s sports betting market is seen as the most potentially lucrative in the United States. The American Gaming Association has estimated that residents could bet more than $18 billion annually. Depending on the tax rate, the state treasury could collect hundreds of millions of dollars each year.

The tribal initiative would ban wagers on college teams based in the state. However, the state with the largest population also has the largest number of professional sports teams.