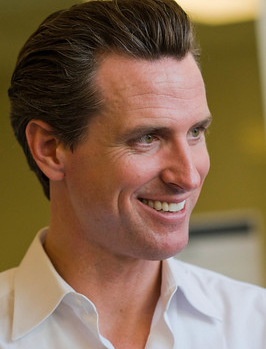 An initiative to legalize sportsbook for gaming tribes and racetracks might not be able to get enough signatures to put it on the ballot in California this year. The effort has been hobbled by the coronavirus, and the order of Governor Gavin Newsom (l.) ordering most people to stay at home.

In light of the coronavirus emergency a consortium of 18 gaming tribes in California have sheltered-in-place their efforts to qualify an initiative for the November ballot that would give Golden State voters the chance to legalize sports betting but would limit it to gaming tribes and racetracks.

Governor Gavin Newsom issued a stay at home order March 19 that included all residents except for members of essential services.

The consortium hasn’t officially dropped its efforts, according Jacob Mejia, a spokesman for the campaign, who told the San Francisco Chronicle on March 22, “We are at nearly one million signatures and were on a trajectory to reach our goal well ahead of the deadline before the unprecedented orders around COVID-19.” He added, “The health and well-being of Californians is foremost. Thus, paid signature-gathering efforts have paused for the time being.”

The effort was close to obtaining the 997,139 signatures required to put the initiative on the ballot, but such efforts usually try to get at least 10 percent more than the required number to serve as a buffer.

Earlier in the month the group announced that it had 600,000 signatures and hoped to easily meet the April 21 deadline. Then the pandemic struck and people began staying home even before the governor’s order.

If the group can’t meet the deadline the earliest they could qualify would be 2022.

The proposal is controversial because it quite deliberately elbows aside the state’s 72 card clubs, an industry that the tribes have been at sword’s point with for nearly a decade over their insistence that the clubs are violating state law when they operate a form of house-banked card games.

It is also controversial because it doesn’t include online sports betting, which is the most lucrative form of sports betting—In New Jersey it accounts for 85 percent of all bets. It would also create a monopoly for sports betting centered in casinos that are generally not near metropolitan areas.

As an added bonus for tribes, the initiative would allow them to offer traditional Las Vegas style table games, including roulette and craps.