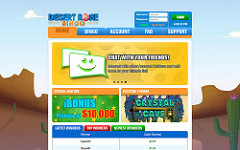 San Diego County’s Santa Ysabel Band of Diegueño Mission Indians of the Santa Ysabel Reservation has been slapped down again by an appeals court denying it the right to offer online poker as part of its sovereign rights.

The remote reservation of about 750 members has been embroiled in legal actions for years due to its claims that it had the sovereign right to offer first online bingo and then online poker.

The tribe built a brick and mortar casino several years ago that it was forced to close, leaving it owing millions of dollars to San Diego County. After that failure the tribe turned to online gaming. It has also leased some of its land for marijuana cultivation.

Last week a federal district judge ruled that Santa Ysabel’s Desert Rose Bingo violated the Unlawful Internet Gambling Enforcement Act (UIGEA.) The tribe claimed that its activities were legal under the Indian Gaming Regulatory Act (IGRA) but the judge held that UIGEA is supreme in this instance.

In 2014 the tribe announced that it would be offering online poker at a site dubbed PrivateTable.com. At first it offered free-play online poker but said it would soon open the site to real money play.

The tribe claimed it was “exerting its sovereign right under the Indian Gaming Regulatory Act (IGRA) to regulate and conduct Class II gaming from the tribe’s reservation.” It alleged that its existing 2005 tribal state gaming compact gave it the ability to offer Class II games.

At that time the state legislature and various gaming tribes and card clubs were engaged in negotiations to adopt state law legalizing online gaming. However, Santa Ysabel was impatient and wanted to pioneer the offering of online gaming, fearing that once it was legalized only the large tribes would benefit. It also wanted to avoid paying the $10 million licensing fee that was then under discussion.

The PrivateTable.com casino did not launch but the bingo site did, in 2014 under the name Desert Rose Bingo. The online games occurred on the reservation using a web-enabled platform that could only be used there.

However, the then California Attorney General Kamala Harris filed a federal lawsuit against the tribe, asking the court to order the tribe to suspend the site. The U.S. government joined the lawsuit, alleging violations of IGRA, UIGEA, the gaming compact, and arguing that the bingo games, as the tribe offered them, were actually a Class III game.

California v. Iipay Nation dragged on until 2016 when the judge ruled against the tribe, holding that the bingo site violated UIGEA since most players using it wouldn’t be on the reservation. The same judge ruled that the compact had not been violated and that the state did not have authority over online bingo.

The tribe appealed and last week a three-judge panel of the 9th Circuit Court of Appeals upheld the ruling. According to the ruling: “The panel held that Iipay Nation’s operation of Desert Rose Casino violated the Unlawful Internet Gambling Enforcement Act (‘UIGEA’). The panel held that the Indian Gaming Regulatory Act protected gaming activity conducted on Indian lands, but the patrons’ act of placing a bet or wager on a game of Desert Rose Casino while located in California, violated the UIGEA, and was not protected by the Indian Gaming Regulatory Act. The panel further held that even if all of the ‘gaming activity’ associated with Desert Rose Casino occurred on Indian lands, the patrons’ act of placing bets or wagers over the internet while located in a jurisdiction where those bets or wagers were illegal made Iipay Nation’s decision to accept financial payments associated with those bets or wagers a violation of the UIGEA.”

According to some legal experts the court has left open the possibility that if customers are located in states that have legalized online gaming (which California has not) that a site such as the tribe’s might legally offer internet games to them.

In essence the appeals court ruled that the location for the betting website and the player’s location must be in jurisdictions where online gaming is legal. It wrote: “… the UIGEA does create a system in which a ‘bet or wager’ must be legal both where it is ‘initiated’ and where it is ‘received.’ ” It clarified that UIGEA prevents the internet from being used to step around existing state and federal laws. Since the tribe’s casino took bets from California residents, California law was held to have been violated.

California gaming law David M. Friend pointed out that some questions are left unanswered: “If a game can be operated over the internet in one state could a tribe located in a different state offer that internet game for patrons of the first state? What about overseas operators? What if the state that permits the game also requires that the game operators be located in state? Does the Interstate Commerce Clause limit the ways in which a state can restrict participation by out of state operators? Given the gradual state by state legalization of internet gambling, these questions are likely to be tested in future litigation.”