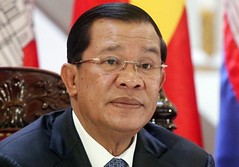 Bowing to pressure from the Chinese government, two hubs of online gaming—Cambodia and the Philippines—have announced they will suspend the issuing of new licenses for the operators. The Philippines has stopped accepting applications temporarily. Cambodia Cambodian Prime Minister Hun Sen (l.) said his country will also let existing licenses expire without renewal.

In recent years parts of Cambodia have been virtually invaded by online gaming operations. That influx apparently is about to end.

On August 18, Cambodian Prime Minister Hun Sen announced that the Southeast Asian country will no longer issue new online gaming licenses, and moreover will allow all existing licenses to expire without renewal.

The announcement may come as a surprise to some. The government until now has allowed land-based and online gaming to proliferate to the point of sprawl, most notably in Sihanoukville, a onetime quiet coastal haven that’s been transformed almost beyond recognition by Chinese investors building brick-and-mortar venues and digital gaming centers.

Hun Sen’s directive, quoted by the Chinese news agency Xinhua, stated, “The Royal Government stops granting principles and licenses to operate online gambling businesses inside and outside Cambodia from the day of signature on this directive onwards.”

The document added: “For valid license holders, they will be allowed to operate until the licenses are expired. After that, the Ministry of Economy and Finance will not renew their licenses anymore.”

The Xinhua report posited that the Cambodian government is taking action because of “foreign criminals” using online gaming “as a front to operate telecom scams” that extort money from victims inside and outside the country. The Khmer Times said the initiative will ban “all online and arcade gambling in the kingdom in a bid to safeguard security and public order.”

China is Cambodia’s close ally and biggest donor and investor, reports Reuters, and exerts extraordinary influence. It has also called for an end to online gaming that originates in the Philippines, and as a result, the regulator there has decided to stem the growth of online gaming by stopping license issues pending further review.

“We will no longer, at this time, accept any more applications until we have reviewed and comfortably addressed all of the concerns of everybody,” said Andrea Domingo, head of the Philippine Amusement and Gaming Corp. in an August 19 press conference.

There are reportedly 58 licensed POGO operators in the country, with three others awaiting licensure. PAGCOR’s gross income from offshore gaming operations was just under PHP2.7 billion (US$51.5 million) in the first half of the year, about 7 percent of PAGCOR’s total first-half gross income of PHP36.6 billion, according to data from the state-run regulator.

In a related matter, China has expressed concerns for its citizens living and working for Philippine offshore gaming operations, or POGOs. An August 8 statement by the Chinese Embassy in Manila decried the plan by PAGCOR to house these foreign workers in POGO “hubs” that would serve as both living and working quarters for the Chinese and separate them from their Filipino neighbors.

Embassy officials expressed “grave concern” about the plan, saying the segregation could “infringe on the basic legal rights of the Chinese citizens concerned.”

Looking at it from a different angle, David Leechiu, head of POGO office broker Leechiu Property Consultants, told the Nikkei Asian Review that the tighter restrictions on online gaming licensing is a “missed opportunity” for the Philippine industry. “I think legitimate operators in Cambodia would have been forced to go to the Philippines,” said Leechiu.

The Philippine government has estimated that 138,000 people, mostly Chinese nationals, work in the POGO industry, some illegally, though Leechiu’s estimate puts the figure at 345,000. Chinese workers are needed because the sector deals mostly with Chinese gamblers, including on the mainland, where gambling is illegal. In fact, the Chinese Foreign Ministry has called offshore gaming “the most dangerous tumor in modern society.”

PAGCOR’s pledge to suspend new licensees was welcomed by Chinese Foreign Ministry spokesperson Geng Shuang at a press conference in Beijing. “We have also taken note of the Philippine government’s announcement and appreciate it. We hope the Philippines will go further and ban all online gambling. We hope it will further strengthen law enforcement with China and jointly tackle criminal activities including online gambling and cyber-fraud. This will help create an enabling environment for the development of bilateral relations and peace and stability in the region.”

Domingo said the pause on new licenses will last through at least the end of the year, and presidential spokesman Salvador Panelo told reporters a total ban on POGO is President Rodrigo Duterte’s call. Panelo stressed that online gambling is still legal in the Philippines.

Duterte and Chinese President Xi Jinping are set to discuss the matter at a meeting scheduled to take place before the end of August.