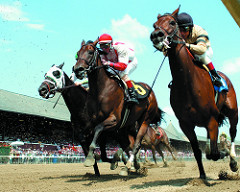 Horse breeders and race operators in Pennsylvania are hoping a new state program will help them bolster sagging revenues from the state’s tracks.

Pennsylvania’s new gaming expansion law specifically “locks down” the portion of statewide slot revenues set aside for the Race Horse Development Trust Fund, a fund that had been tapped for other state purposes in the past. The Pennsylvania Equine Coalition has used some of the $239 million in the fund to hire Harrisburg-based advertising agency Pavone to create a marketing campaign designed to bolster the racing industry.

“Millennials are more interested in experiences, and what is going to the track but an experience?” said Pete Peterson, spokesman for the Pennsylvania Equine Coalition, in an interview with the Pittsburgh Tribune-Review. He said the campaign will aim to educate novice bettors to reduce the intimidation factor of going to the racetrack.