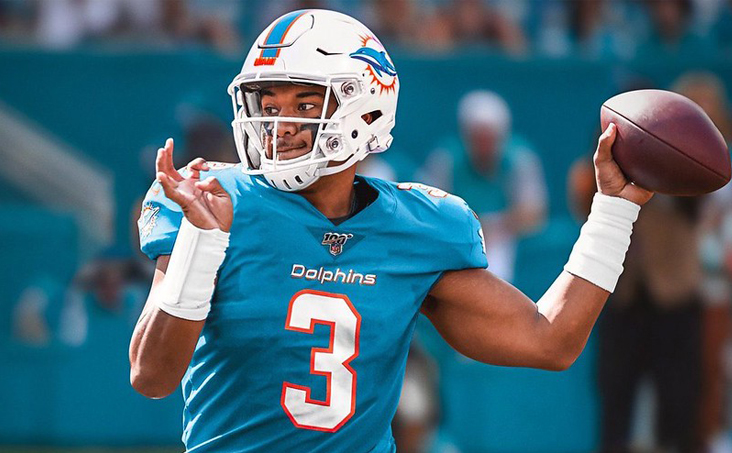 In Week 1 of the NFL season, the New England Patriots defeated the Miami Dolphins 21-11. But improved standings for the Fins and young QB Tua Tagovailoa taking the reins have NE watching their playoff hopes in the rearview mirror.

Dolphins 2.0 Games Behind in AFC East

The Miami Dolphins deserve plenty of credit for a valiant comeback attempt, even if they fell a little short against the Kansas City Chiefs last week. Unfortunately for Miami, the loss coupled with a Buffalo Bills win has dropped them 2.0-games behind the AFC East race. At 8-5, the Dolphins have a tenuous grip on the final playoff spot in the AFC. With road games against the Las Vegas Raiders and Bills during the final two weeks of the season, this is the easiest game left on Miami’s schedule.

The Dolphins (+1700) are major long shots to win the AFC East. However, Miami (+215) has a decent chance at earning a Wild Card berth.

While his numbers remain a bit erratic, Tua Tagovailoa appears to be getting better every game. Last week was his first time throwing for over 300 yards in his young career, nearly bringing the Dolphins all the way back from a 30-10 deficit against the Chiefs. Miami’s problem is that they don’t have enough playmakers around the rookie quarterback. The wide receiver position has been burdened by injuries. Plus, the Dolphins haven’t had a consistent rushing attack all season. In other words, the success of the Miami offense hinges on the play of Tagovailoa.

Fortunately for Miami, their defense is one of the best in the NFL. Giving up 33 points to the Chiefs last week tells a different story, but the Dolphins also forced four turnovers in that game, including three interceptions against Patrick Mahomes. The Miami defense has conceded 21 points or less in 9-of-13 games this season. More times than not, they play well enough defensively to give themselves a shot.

Miami has covered in three-straight and their over/under record stands at 5-8 on the season.

If you want to roster Patriots or Dolphins players in your DFS lineups tonight, get a 3-day free trial at BetlQL.co’s RotoQL for the latest projections.

It’s now or never for Bill Belichick and the New England Patriots. We thought the Pats had momentum after their 45-0 thrashing of the Los Angeles Chargers, but they failed to show up last Thursday in a 24-3 loss to the Los Angeles Rams. As a result, New England’s reign atop the AFC East is officially over. At 6-7, the Patriots are barely alive in the playoff race and will likely need to win their three remaining games to have any sort of chance.

The Patriots (+2000) are massive underdogs to earn a playoff berth. 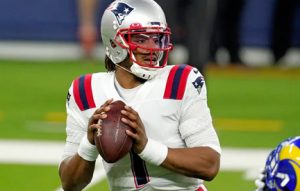 Belichick has made it clear that he’s sticking with Cam Newton (l.) at quarterback. Newton has thrown for 120 yards or less in four of his last five games and still has just five touchdowns through the air compared to 10 interceptions. However, the Patriots continue to bet on Newton’s running ability. The problem with that strategy is that it makes the New England offense one-dimensional, putting them in tough spots if they fall behind by more than one score.

Likewise, there’s a ton of pressure on the New England defense since the offense can’t be trusted to score. To their credit, the Pats have hung in defensively. After all, they shut down Justin Herbert and the Chargers a couple of weeks ago and held the Baltimore Ravens and Arizona Cardinals to just 17 points apiece. Can Belichick stifle another young quarterback?

The under has hit in 9-of-13 New England games this campaign. The 41.5-point over/under line is the second-smallest they’ve seen all season.

It’s funny to think about the way the season has unfolded, but the Pats beat the Dolphins 21-11 in Week 1 when Ryan Fitzpatrick was starting. Newton had a good game running the ball and was also an efficient passer. On the other hand, New England also benefited from three Fitzpatrick interceptions in that contest. The New England defense may need to do the same to Tagovailoa this time around. On the other hand, this game is likely to be low-scoring, giving Newton and company a fighting chance.

Where to Watch Pats-Dolphins Game

The New England Patriots will meet the Miami Dolphins at Hard Rock Stadium in Miami Gardens on Sunday, December 20 at 1 p.m. ET on CBS.